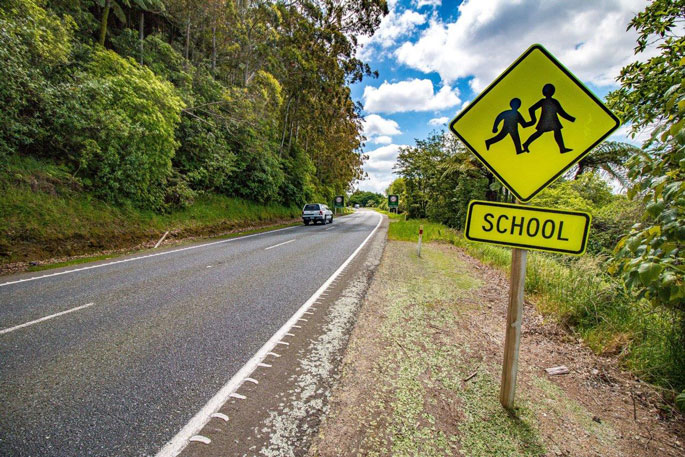 Work on a new shared path and four pedestrian refuge islands set to get underway in Ōkere Falls this month.

Construction of the new shared path and pedestrian islands in the popular destination, northeast of Rotorua, is part of the State Highway 33 Te Ngae Junction to Paengaroa safety improvements project.

Last year, Waka Kotahi also introduced safer speed limits along this stretch of road, including 60km/h through Ōkere Falls and Mourea, and installation of an electronic speed sign to advise drivers of their speed as they were entering Ōkere Falls.

“Before starting the SH33 safety improvements and during the speed limit consultation, Waka Kotahi sought feedback from iwi, stakeholders and the community about this road and concerns were raised about traffic going too fast through Ōkere Falls, Mourea and Paengaroa. People told us they felt unsafe crossing the road at Ōkere Falls,” says Wilton.

In March 2021, Waka Kotahi consulted on a proposed shared path and four pedestrian refuge islands to make it safer for people to walk or bike between Ōkere Falls and Hamurana Road.

Feedback on the proposed design was mostly positive, with people saying it was a great idea, long overdue and vital to connect communities.

Local resident and representative of the Lake Rotoiti Community Association Inc, Jim Stanton, acknowledged the efforts made to get a shared path after many years of lobbying, and is happy with the proposed safer walkway between Mourea and Ōkere Falls.

“We’re really happy to have a path that safely connects our communities. If further funding did become available, we’d like to see more safety improvements given the ever-increasing popularity of the area. However, the proposed shared path will be very much welcomed by the majority of our local residents.”

Jo says there are a number of important safety projects around the country, and Waka Kotahi needs to prioritise the timing and funding available for these so we can make the biggest difference in reducing deaths and serious injuries.

“We’re happy to have secured funding for these important safety improvements. We know they will make it safer for residents, school children and families who walk or bike alongside SH33. The shared path separates them from state highway traffic and provides better connectivity between Mourea and Ōkere Falls.

“We’re also installing four pedestrian refuge islands that will provide a safe place in the middle of the road to wait before continuing across the road. The shared path and pedestrian islands also provide visual reminders to motorists to slow down and be aware of other road users in the area,” says Ms Wilton.

Waka Kotahi has a vision where no one is killed or seriously injured on our roads. Everyone should get where they’re going safely whether they’re walking, cycling, driving, motorcycling or using public transport.

To reduce deaths and serious injuries on Aotearoa’s roads and streets, we need to create a safe system designed for people. To create a safe system, we must look at all the factors that contribute — infrastructure such as side barriers and rumble strips, safe speeds, and the safety rating of our vehicles.

Shared path construction – what to expect

First the contractor, Downer, will widen the road shoulder and then construct a two-metre-wide shared path along the edge of the road.

Once completed, the shared path will be behind a safety barrier within the 80km/h section between the Waipuna Bay lay-by and the Whangamarino School access.

Four pedestrian refuge islands will also be constructed. An indicative map of the shared path and location of the pedestrian islands can be viewed online here.

During this work there will be temporary speed limits and lane closures with Stop/Go traffic management in place at times to protect road users and the team on the ground.

The new shared path and pedestrian refuge islands are expected to be finished in September 2021, subject to weather. 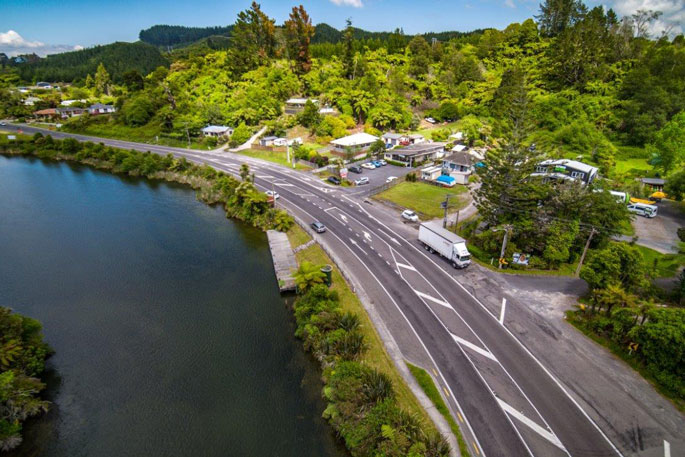 The new shared path will follow State Highway 33 between Ōkere Falls and Hamurana Road. There will also be four pedestrian refuge islands installed along the route.