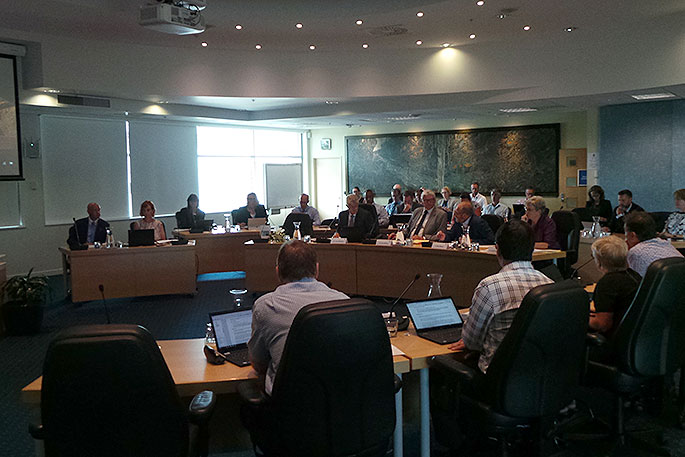 The appointment in February cancelled elections scheduled in March for a new Mayor and Councillors. File photo/SunLive.

The appointment of city commissioners to replace Tauranga City councillors is being called “unlawful”.

The Tauranga Ratepayers’ Alliance is releasing a legal opinion, obtained under the Official Information Act, which suggests that Local Government Minister Nanaia Mahuta acted unlawfully when she sacked the City Council and appointed Commissioners.

The appointment in February cancelled elections scheduled in March for a new Mayor and Councillors, removing the right of Tauranga residents to choose their own leaders, says a statement from the Tauranga Ratepayers' Alliance.

-that the Minister failed to adequately consider lesser alternatives, such as the appointment of a Crown Manager, and as such “does not meet the statutory requirement in the [Local Government Act 2002]”. Should the issue proceed to Court, Russell McVeagh has suggested: "a court would likely expect a robust assessment of lesser interventions to have been first undertaken”.

-the information provided by the Department of Internal Affairs to the Minister was arguably “incorrect, misleading or insufficient for the purpose of making the decision that a Commission should be appointed”.

-strong criticism of the recommendation by Peter Winder, chair of the Review and Observer Team, that a Commission be appointed because he did not inform the Council nor allow Councillors the opportunity to respond to it, as required under his terms of reference. Russell McVeagh found this breach “could potentially impact on the integrity and validity of the Minister's Decision” and could result in Winder's recommendation being “set aside by a court on natural justice grounds”.

The advice is being released by the Tauranga Ratepayers’ alliance and is available at www.taurangaratepayers.nz/legal_advice

In reaction to the release of the legal analysis, Tauranga Ratepayers’ Alliance spokeswoman Dawn Kiddie says this analysis provides a chilling insight into the casual way the Minister stripped the community of democracy.

“The release of the advice will be embarrassing for Wellington. It shows how vulnerable the Commissioners are to legal challenge,” says Kiddie.

“But the way to fix this is easy, Tauranga should be returned to democracy with fresh elections held.”

SunMedia has attempted to get comments from the Minister on the allegations, but she has so far failed to respond.

The Professor: they weren’t all clowns, Tenby and Baldock were. Informed: reading your comments makes me think your mates with one or more of the commissioners. You can’t be serious. Accountable:.."full approval of a Council staff member and the sum of $700,000,000.00 required to fulfil these wants of the Council staff." .."the needs would be actioned and the wants would be apportioned and the Council staff would have less involvement in the wants and more involvement in the needs. .."The commissioners are out of their depth....are taking the Council staffs recommendations because they are the only form of so called communication they have with the community. You are spot on!

You would have to have rocks in your head if you believe the Commissioner setup is good for the future of Tauranga. Anne Tolley in todays Sunlive has listed a number of projects they have assigned for the city for the next ten years with the full approval of a Council staff member and the sum of $700,000,000.00 required to fulfil these wants of the Council staff. That’s an extra $70,000,000.00 a year of rate payers money to achieve the wants and not the needs of the city. If we were still a democratically run city the needs would be actioned and the wants would be apportioned and the Council staff would have less involvement in the wants and more involvement in the needs. You have a very one sided and one eyed view of how you think the city should be run but most would disagree with you.

Do you have evidence to back up those claims? Any factual data? Or is it just a “feeling”?

Commissioners have spent significantly more time with the community, community groups, business groups and stakeholder groups than any of the previous councillors ever did. This is what real community engagement looks like. Not like the councillors use to do, of having a chat with their buddies and then voting based on that. To say that the commissioners is out of their depth is a joke. You only have to watch them in action to figure out how much knowledge they have on the subjects in front of them. And the challenge they are putting back onto the CEO is also impressive.

Whether it was legal or not...

can (and will...) be argued, but, either way...we needed to be shot of them. The failed candidates who are currently running the Ratepayers Alliance can posture all they want; they have lost all credibility and, frankly, don’t deserve to be Tauranga Councillors. If I was one of them, and I believed I wasn’t guilty of the charges that led to their replacement, I’d make a public statement of my side of it and then I’d stand again and let the people decide. Trust and the credibility that goes with it, is hard won and should be valued. Sitting on the sidelines sniping, is no way to do that. I believe the Commission is far from perfect (not the least being it is undemocratic), but it is still better than the fiasco of schoolyard governance we were subject to under 10B.

Well obviously the Government wouldn’t ask for a review of whether their actions were legal or not. But the thing is, it’s an independent review carried out by lawyers, and in their professional opinion it was illegal. It’s all well and good people saying they want the Government to step in and run everything but you only say it if you happen to like the Government of the day. Many people like the idea of the Government running their lives because they can’t but it’s a slippery slope. Sure the Council is rubbish and needs to sort itself out but two wrongs don’t make a right. The egotistical Mayor went so they should have been allowed to sort themselves out. It was pure politics by a totalitarian regime. You may want to live in such a state but be careful because the worm could turn.

City Council policies are created by council staff working under the CEO. They have the responsibility of managing a city according to the needs and central govt requirements. Councillors can only question and debate the issues put forward by council staff. Part of this is called a Long Term Plan. The years of poor management goes directly to the poor decision making by council officers. Councillors were the only avenue to influence coucil staff decisions. Now there is no way to influence the planning process. All the submissions heard by the commissioners was just a process but very little was changed. The fact that some councillors are still working for Tauranga is gratifying.

Reading the comments thus far Labour and Communism are safe for some time to come! At least the majority of the previous Councilors kept the Council staff somewhat accountable but under the present Commissioner setup the staff have a complete and unabated run of the cities finances and operations. The commissioners are out of their depth because they really don’t have any regular connection with the community and are taking the Council staffs recommendations because they are the only form of so called communication they have with the community. Almost every Council in the country are or have had some differences to varying degrees but they weren’t lumbered with an amateur and vengeful mayor in the way Tauranga was at the last elections. Most, but not all the Councillors were doing a damn good job but the mayor and a couple of his supporters thought otherwise.

This is legal advice requested by John Robson (a councillor). It is not advice provided to the minister, which appears to be what the article and rate payers allliance is implying. More dirty tricks.

So the Tauranga Ratepayers Alliance steering committee includes sacked Councillors - it’s therefore no surprise that they don’t like the appointed Commissioners.

This has simmered for years about the poor perfomance of our councillors and something needed to be done.

do away with those govt people trying to tell us what to do. mahuta has already screwed up the democratic process. lets have a completely new election with all new councilors.

So the councillors that ruined this city and acted worse than little kids are now playing the same old backstabbing games. Commissioners are the best thing that ever happened to this city and we need them in place for a long time to come. We don’t want any previous councillors back!

We averted a crisis

As a rate payer the alliance shove thier opinions. We were getting screwed by counsellors that behave worse than toddlers. The infighting and petty behaviour was crippling our city and would have ended up leaving us, the rate payers with an enormous debt with nothing to show for it. Half baked pet projects have not eased the issues choking our city. When we elect our next council, we need to not vote in any of the sacked councillors otherwise we are doomed to repeat this all over again.

The current government has a genuine lack of talent. Years of attending Parliament but still hasn’t learnt how to make a decision after getting an opinion from an expert (someone who knows what they’re talking about).

The last thing we need are the ousted failed councillors back in city hall. They just can’t stop back stabbing and are trying to keep this city in the dark ages! Can’t they get a job anywhere else?

Depends on what you asked for

Legal opinions are only as good as the question asked from the lawyer. EG: is this legal, or give an opinion to support an illegal argument.

Are getting the job done without any backstabbing. Has to be better than what we had. Sack the Alliance I say!

Time to move on.

Time to move on ’bum twitches’. The public don’t want those sacked clowns back.