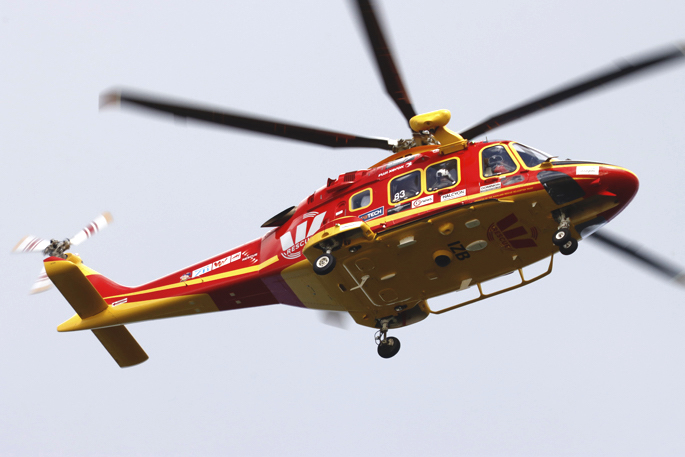 A battle to bring a lifesaving helicopter service back from the dead is heading to the Beehive.

For more than a decade, a Whitianga-based chopper service was on the spot to fly people out of potentially deadly situations until the Ministry of Health axed the service in 2019.

Residents have been rallying to return the service ever since and Coromandel MP Scott Simpson is backing them.

The ministry has made a deliberate decision to “prioritise Auckland and Northland ahead of people in Coromandel and I don’t think that's good enough”.

But the ministry stands by its decision, saying Whitianga is not an “ideal location” from a national perspective and flying from Auckland to Coromandel only adds an extra 18 minutes to rescue times.

Prior to 2019, the Coromandel Rescue Helicopter Trust had been based in Whitianga for more than 12 years to assist the legions of holiday goers who flock to the district during the festive season.

But over the last few years helicopters have been taken out of smaller areas and based in centres with bigger populations such as Hamilton, Tauranga and Auckland.

Locals fund raised more than $1 million to update the Coromandel base with new hangars and accommodation for pilots and paramedics, but that base now sits empty.

Two local residents have presented two petitions to a parliamentary select committee calling on the Government to reinstate the rescue helicopter.

With nearly 50,000 signatures supporting the petitions the committee has since released a report late June, which will be handed over to the House for consideration in the coming months.

Local MP Scott Simpson also agrees, slamming the Ministry of Health for its lack of sympathy and willingness to work with the community to find a potential solution.

“I think the Health Committee understands the issue and the complexity of delivering services to the Coromandel, but what’s sad is that the Ministry of Health clearly doesn’t understand that complexity.

The summer just gone there was a rescue helicopter stationed in Coromandel over a four-week period, but Simpson argues that’s not enough.

“Over the summer Coromandel is essentially Auckland’s holiday playground, and we have huge numbers of Aucklanders arriving on the peninsula.”

He is also “terribly disappointed” to see the ministry’s response that an addition 18 minutes of flight time from Tauranga, Hamilton or Auckland to the nearest hospital is acceptable.

The Ministry and Health Minister Andrew Little, however, stand by the removal of the chopper.

Little says they started the modernisation programme due to a “fairly disjointed air ambulance service” and as a result are “getting help to sick and injured people faster”.

“The programme includes bigger and better helicopters, better clinical crewing and co-ordination under a National Air Desk. We have professionalised the service nationwide,” Little says.

“Whitianga and the wider Coromandel Peninsula are serviced by two air ambulance providers – Northern Rescue Helicopter Limited and Central Air Ambulance Rescue Limited. Between these there are eight helicopters that can provide emergency services to the Coromandel Peninsula.

“The three bases –Auckland, Hamilton and Tauranga – are the closest to the Coromandel Peninsula. The other bases at Whangārei and Taupō can also service that region but are a little further away.”

When Auckland Rescue Helicopter Trust has available helicopter and crew capacity in addition to the contracted capacity it provides, he said it can choose to base this at Whitianga, and it has done this in recent summers.