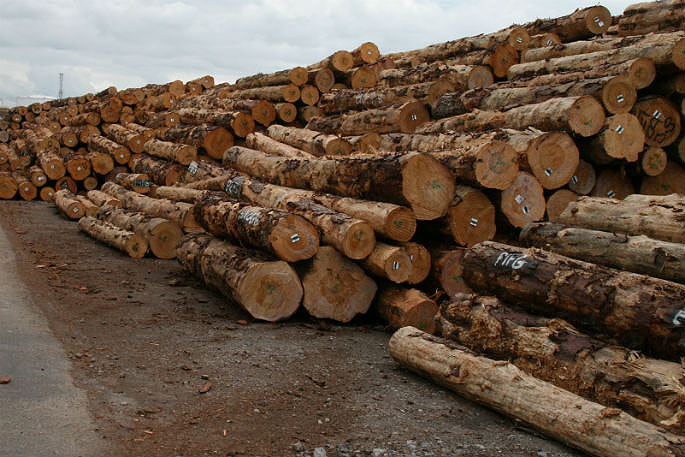 Ozone-depleting gas methyl bromide is used as a fumigant to kill pests on logs for export to India and China. It is pumped under tarpaulin-covered stacks of logs and then released into the air.

Community groups are apoplectic the country's environment watchdog has once again delayed a deadline that would effectively ban a highly toxic gas used to treat logs for export.

In October 2010, the Environmental Protection Authority told the logging industry it had 10 years to stop releasing the significantly ozone-depleting gas methyl bromide into the atmosphere.

The gas is used as a fumigant to kill pests on logs for export to India and China.

It is also toxic to humans and damaging to the ozone layer, and international agreements require it to be phased out.

The gas is pumped under tarpaulin-covered stacks of logs and then released into the air, and the 10-year deadline requiring industry to recapture essentially all of the gas was up last October.

Industry group STIMBR says full recapture is "impossible" and it has asked the EPA to reassess recapture requirements.

The EPA has now pushed the recapture deadline out to February next year - the fourth such extension - to give exporters to India certainty they can fulfil orders.

"It's completely unacceptable. We feel that [what's being lost sight of] ... is the amount of this ozone-depleting neurotoxin that is used at the Port of Tauranga so close to where our kids play sport .. the workers at the port and the residents nearby.

"We say enough is enough."

Locals are fed up with having to fight to keep themselves safe, she says.

"We don't have the resources to keep fighting this and we just expect our institutions to do do the right thing."

Methyl bromide use has more than doubled as log exports grew during the grace period given to industry to work out the recapture technology - or find another solution.

Tauranga Moana Fumigant Action Group lawyer Kate Barry-Piceno says parts of the extension decision are unlawful and make a mockery of natural justice and due process.

"It's really infuriating, I think in particular because we expected that the timeframe of 2020 was the stick.

"It was the stick that was going to be the thing that forced industry to change."

Barry-Piceno says it's not fair that some companies have sunk serious money into cleaner but more expensive alternatives expecting the deadline to be enforced, while those that did not are benefiting from the continued extensions.

She says ultimately the buck stopped with the regulators - it's their job to force industry into line.

"It appears as if [the Ministry for Primary Industries] has, alongside the EPA, allowed the logging industry to not step forward into the space and [show] sound environmental leadership around the regulation that at an international level that New Zealand had committed to."

She says the EPA is failing in its duty to protect the environment and the health and safety of people.

Three-quarters of a billion dollars worth of export logs were treated with methyl bromide in 2019, about a quarter of the total amount sent abroad.

An application to allow an alternative fumigant called EDN - which has a negligible environmental risk and very low risk to health - has been before the EPA for nearly four years.

Kade McConville works for the international firm the Draslovka Group which develops and sells the substance which is already used overseas.

Draslovka Group has spent at least $5 million and jumped through hoops trying to get its cleaner and more effective product registered, McConville says.

"We continue to go around in circles trying to get our approvals from the EPA.

"The biggest disappointment is that we see these further extensions for methyl bromide coming through, yet we don't see any progress on EDN.

"All we're asking for, and have been for the last four years in New Zealand, is a level playing field."

STIMBR spokesperson Don Hammond says it's in a holding pattern waiting for decisions to be made.

In a statement, the EPA says staff are assessing new information received on the EDN application.

It says its decision committee granted STIMBR's requests for deadline extensions while it considers STIMBR's application to amend the recapture requirements.

The EPA says STIMBR is free to seek further extensions but there is no guarantee they will be granted.

How sad is this?

Never mind the Greenies who are pushing for it, what about the PEOPLE who live nearby? There is a viable alternative and the prevarication we are seeing is because the industry is loth to make the necessary investments to change the process. If the Government blocked all timber exports until there was compliance, I reckon they would be compliant within a few weeks. But we won’t see that happen because it is a political hot potato that requires courage and integrity in order for it to be grasped... Yes, we should support our export industries, but they should be examples to the rest of commerce... Responsible and efficient using best practice and not just creaming profits at the expense of communities.