BOP racer is a sidecar star 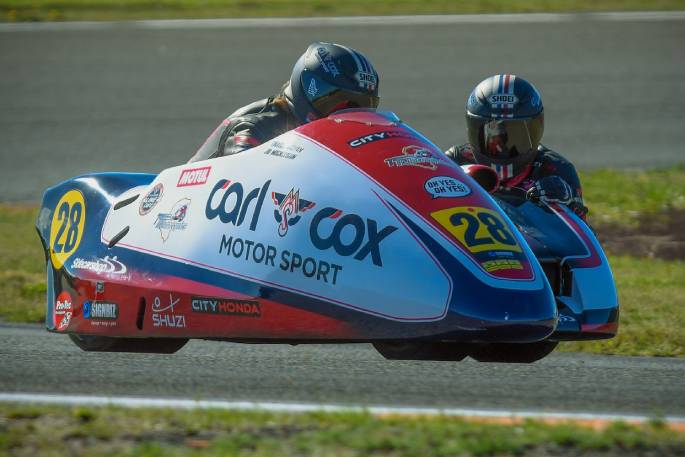 Sidecar racing is not for the fainthearted and, with her fearless and trusted team-mate by her side, there really is no stopping Bay of Plenty sidecar ace Tracey Bryan.

The Tauranga racing driver piloted her Honda CBR600-powered sidecar to sixth overall in the national series this year, no mean achievement in a sport dominated by the men and also with so many of them on sidecars equipped with 1000cc engines.

So it's probably fair to say that 48-year-old mum-of-three Tracey, who works as a rural postie, is also New Zealand's fastest rural mail delivery person.

"As a sidecar driver, I rely on Jo (Mickleson, her sidecar 'passenger', from Hamilton). We are very much in sync with each other and we have had a lot of success,” says Tracey.

"The sidecar people are all very supportive of one another. It's a family atmosphere in the pits. It's very competitive on the race track but when someone comes into the pits with a problem, even if they're your rival, the teams will still get behind one another.

"Our male opponents are all giving us respect ... more so now than in the beginning perhaps. At the start I think they thought we were a bit of a joke, but over the years I got better and better and Jo and I started to click and then we gained a certain amount of respect when we started to beat the guys."

Tracey believes there is really no handicap being a woman in motorcycle racing.

"As women we think a little differently on the track. We are not so aggressive, calculate the risks and we get faster as a race wears on.

"I'm the only woman sidecar rider in New Zealand and when we raced in Australia, we were the only women’s sidecar team there too.

"I'd like to think I'm an inspiration to other women – I’ve been doing this for 15 years now. Women will come to a 'have a go' day at the track and they'll look at us and feel more comfortable knowing there are already women doing this," says Tracey.

"I think it's great that Tracey and Jo have been so successful and plan to do more winning, it would be foolish for anyone to think they wouldn’t."

Well done Tracey! Scoring a big one for women!