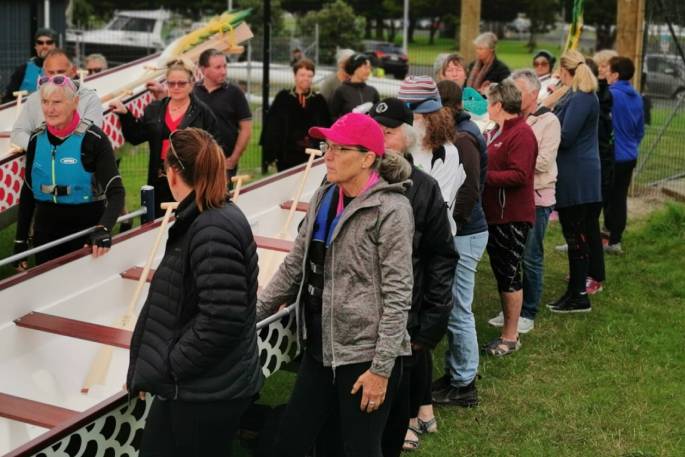 Members of the Bay of Plenty Dragon Boat Club gathered together last Saturday for a blessing ceremony for their new dragon boats. Supplied photo.

Members of the Bay of Plenty Dragon Boat Club gathered together last Saturday for a blessing ceremony and to bestow good luck upon their two new dragon boats, which recently arrived from China.

Brooke says when there is a new dragon boat, it needs to be properly awakened by dotting the forehead— being the Wisdom Eye— the tongue, the body and the tail.

“It is considered very bad luck to paddle or race in a dragon boat that has not been properly awakened, or has not had its eyes opened,” says Brooke. 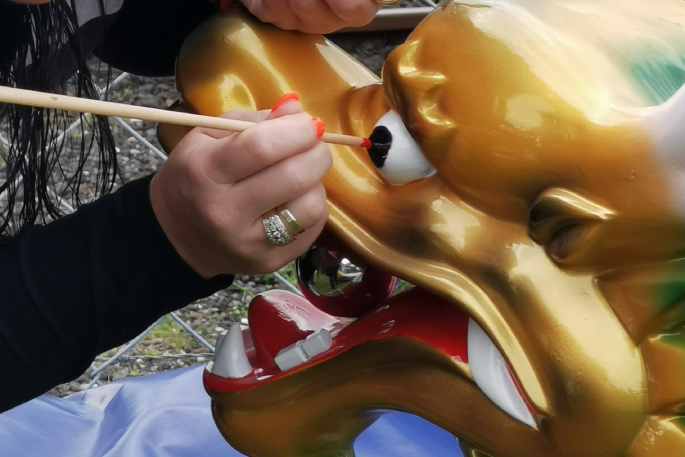 When there is a new dragon boat, it needs to be properly awakened by dotting the forehead— being the Wisdom Eye— the tongue, the body and the tail. Supplied photo.

Traditionally the ceremony also involves cutting roasted pigs, a lion dance, and appeasing the dragon with rice dumplings. It is about respecting the dragon and getting him into a good and friendly mood towards you, the team, and the community.

“The sun was shining and it was really nice having the little twist of the kaumatua there. Having some Māori culture there was great, because traditionally it holds more of a Chinese aspect due to the boats originating from China.”

The boats arrived on May 10, seven months after the club first made their order.

Brooke says the club ordered the boats early so they would arrive before the Chinese New Year which is in February.

“Because of Covid, everything got delayed but then once the Chinese New Year began all the factories closed for a very long time.

“Once we had our boats made, the next issue we found was the shipping the shipping— which is normally 1500 USD— had raised to 8800 USD.

“It wasn’t until another region down south ordered a boat as well that the shipping eased.”

The two dragon boats cost the club $26,000 which according to Brooke is quite expensive, but due to funding from Pub Charity, it was able to go ahead.

“We are so thankful to have the opportunity to introduce our new dragon boats ‘Moana’ and ‘Ngaru’ into the fleet.

“These new boats allow us to better facilitate the sport here in Tauranga, and preparations for our corporate challenge, The Tauranga 10up Dragon Boat Regatta set for October 30 at Lake Taurikura is now underway.”

...which recently arrived from China.

Are there NO boat builders in NEW ZEALAND capable of building these canoes ??