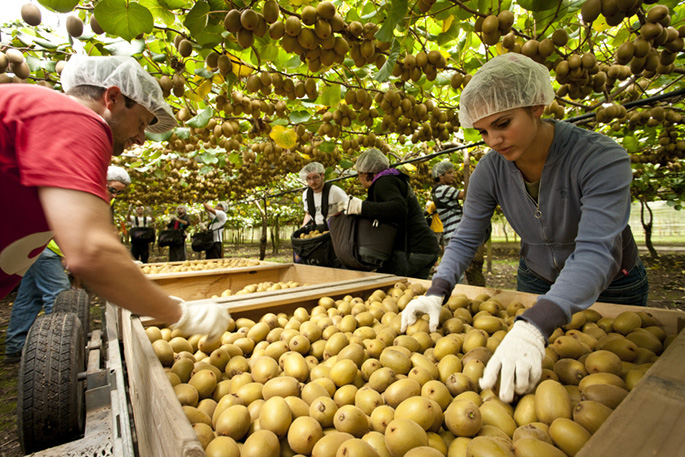 The kiwifruit industry has reached the end of this year’s harvest. File Photo/SunLive.

The kiwifruit industry has successfully reached the end of its harvest with a record crop now headed for overseas markets – if not already there.

However, he says “that was down to a combination of good practice and good fortune.”

“We continued our labour attraction strategies from previous years, based on getting good information on the work available to potential workers via collateral and a range of media, including a strong social media programme.

“That was bolstered this year by the support from the Ministry of Social Development and Ministry for Primary Industries which made significant contributions to get unemployed kiwis into the kiwifruit industry.

Colin says a pattern of mixed weather through the season slowed the harvest, meaning that harvest work was often disrupted.

“It was a very wet season and a long one,” says Colin.

“But that simply means the fruit is on the vines longer and increases the pressure to get it picked at the optimum time.”

One development that was expanded this year was to raise awareness of the career possibilities and long-term work available in the industry,” says Colin.

“We don’t just need workers for the harvest; we need them for crucial winter and summer maintenance work to ready the vines for the next year’s crop.

“For that, we’ve retained our ‘taster’ courses which give people an introduction to the roles and a chance to have a go.”

He says NZKGI would be closely reviewing and evaluating its 2021 recruitment programme and assessing the new challenges to identify how the labour uncertainties could be reduced in 2022.

“We see kiwifruit, along with the other horticultural crops, needing certainty of labour supply and one way we can encourage this is by supporting employment of a workforce that can be on the orchards almost year-round.”

Colin says the labour shortage issue is crying out for solutions to create certainty and RSE workers from the Pacific Islands are critical for the near future.

“That would be a massive boon for both the Island economies, which are struggling given the massive impact of Covid-19 on tourism, and the New Zealand primary sector.

“In the longer term, the industry is also looking at automation and is innovating and expanding into this area.”

Colin says labour will remain a critical topic as the industry heads into next season.

“We’ll be looking again to take a lead on this issue.”

More information on the winter pruning taster courses that are currently available can be viewed on the NZKGI website.