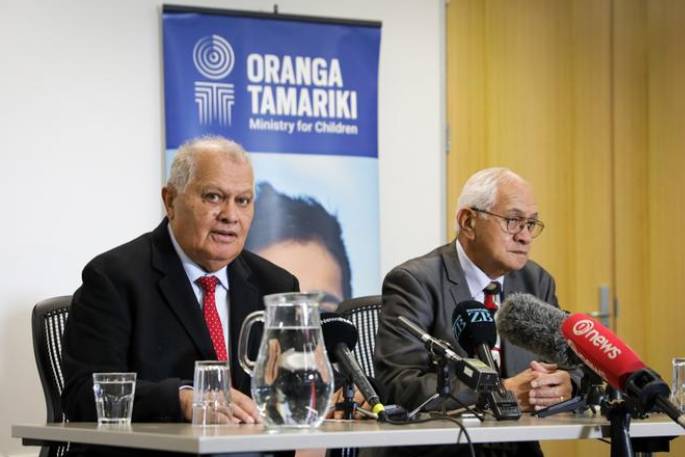 The Oranga Tamariki care and protection residence in Christchurch where a young person was reportedly tackled and held in a headlock will be temporarily closed.

The video posted this week on the Newsroom website showed a young person being surrounded by staff, tackled, restrained and held in a headlock at one of the ministry's care and protection facilities.

Since then, some staff have been stood down and Children's Minister Kelvin Davis admitted the system was broken.

The agency's chief executive, Sir Wira Gardiner, says the leaked video was one of the reasons that led to the decision to close down Te Oranga, "... including preliminary investigations, I want to know what happened, why it happened and why our processes didn't work and a range of other questions."

"As we saw in the video earlier this week the restraints that was used by members of my staff appear to be excessive force and that's being investigated by the police right now."

He first heard about the forceful practice through the video that was leaked.

"We have internal processes for reporting these kinds of things,” he says.

"One of the questions that I've asked investigators to look at is ... how is it that we didn't know? Is it that our reporting system is inadequate, is it broken, does it need to be fixed? What needs to be done?

"How is it that we have to rely on somebody leaking CCTV footage to the public via television?"

Gardiner says he was not "chasing anyone" for speaking up about the abuse.

"In fact, I would like people to speak up.

He said the whistle-blower did a "service" by providing the footage to the public.

"It allowed me to focus on something I was not aware of until Monday morning, or aware of to the extent of it and we acted promptly on Tuesday by initiating an investigation, triggering the police protocol, and standing down a number of staff, and indicating that we would be moving to consider the seriousness of the issues that were involved.

"So, we are reacting and I would prefer these things come through the processes that we have.

"I don't care where they come from as long as the kids are safe. People can ring me in the middle of the night if they have a worry about a child. These children with high complex needs are the most vulnerable, therefore they need the higher duty of care."

Soon after the video was released, he says the agency checked on the three other care and protection residences and the children there.

"In time, they too will be closed.

"If I find these kinds of things happening in other facilities I will act as well."

Closure of facility, staff on leave

Gardiner says his priority was for the safety of tamariki at Te Oranga.

"The fundamental premise of our actions are the children.

"Closing the facility is not a quick, instant or easy operation.

"We are already in the process of planning the safe transition of all the tamariki currently staying at Te Oranga to other appropriate care arrangements."

He says the children won't be moved just yet until new staff come in over the weekend.

There are 10 people staying in the facility at the moment, ranging up to 14 years, and 60 staff.

"They are not children, but they are in that teenage bracket," Gardiner says.

He says he expected a high standard of all staff including the new ones arriving to the facility.

"We stood a number of staff down early this week which I announced earlier this week but now all staff will be on [paid] leave as of midnight Sunday.

"I'll move staff, if I have to, from around the country to meet the needs of the children of Te Oranga.

"Oranga Tamariki is undergoing a period of extensive change. I am doing everything possible to right the wrongs and fix the hurt."

Gardiner says staff who worked well would "always have a job". He could not say how many staff would continue to receive full pay, but indicated those who were stood down had arrangements with the HR department.

Final decisions about the future of Te Oranga would be made once all reviews and investigations were completed, he says.

"We are already in the process of transiting from these kinds of facilities. We have four residences of this kind throughout the country which house 33 children. We have a joint venture with Barnardos in Christchurch which has eight children."

"We believe that these kinds of facilities like Te Oranga will need to be phased out and we'll move to much more small accommodation, which allows us to give greater care and attention on a one-on-one basis to the young people who are by and large requiring significant resources and effort to deal with the trauma that many of them face."

He says Oranga Tamariki would build 10 houses, and the soil would be turned on the first one in the next week or so.

"But given that we're in a crisis situation, I intend to accelerate the process to make sure that we can move faster and if it requires reprioritising the money that I have within my budget, I'll do it."

The Association of Social Workers demanded a system, independent of Oranga Tamariki, set up where staff can make complaints, without fear of losing their jobs.

Gardiner took over as acting chief executive from controversial predecessor Grainne Moss who stepped down in January 2021. At the time, Becroft said Moss' decision to step aside was principled but said the issues facing the agency were structural.