Mill closes amid questions of contamination 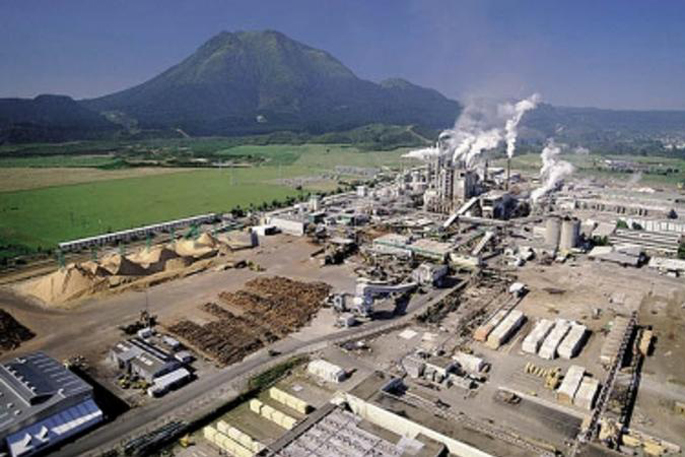 Kawerau's Tasman paper mill has closed amid questions about what contamination it leaves behind.

Freshwater campaigner Tiipene Marr, of Ngāti Rangitihi, says owner Norske Skog should have to produce an environmental audit before it leaves.

The Norwegian company says it is aware of the environmental matters, and would meet all its obligations.

Tiipene and his family used to call the river the "black drain" - now they call it the "brown drain".

Tiipene says in the past workers got sick from exposure to Tasman mill contaminants, and he says he watched as diggers buried chlorine-contaminated sludge in nearby forests.

The river is much cleaner than it was, though downstream from the mill, a monitoring site on State Highway 30 shows high phosphorus, ammonia and discoloration levels, in the worst quarter of monitored rivers, and in some cases worsening.

"We should get online with the Norwegians and tell them they're leaving a whole lot of pollution in New Zealand," says Tiipene.

At the Tasman mill, no clean-up plan has been required before it shuts.

The regulator, Bay of Plenty Regional Council says: "There is no overarching audit report. There are no specific remediation plans required."

At the Tiwai Point aluminium smelter, also a sunset industry in New Zealand, there also was no over-arching audit and the government has had to pay Southland Regional Council $300,000 to come up with one for testing whatever remediation plan the smelter company eventually releases.

Another major industry changing tack, the Marsden Point oil refinery, does not have a remediation plan in place because fuel imports look set to continue there.

At Kawerau, a process is underway to "confirm remediation plans that mitigate effects on the environment, if required", says Bay of Plenty Regional Council compliance manager Stephen Mellor.

The council met with the company on Friday.

But Norske Skog says it was "not undertaking an environmental audit of part or all of the site".

"The environmental issues across the site are well known and are being managed in accordance with existing licence conditions," it stated.

The regional council is stressing it will keep monitoring the resource consents even after the paper mill shuts.

Most key consents were held jointly with other companies which would continue to be responsible for monitoring, managing and "potentially remediating if required".

Any landfills that are closed would have to have closure plans, the council says.

Regional councillor Toi Kai Rākau Iti says the river was compromised in years past and Tiipene is right to be "raising the alarm".

"We should all be worried about big industries walking away and leaving a mess," he says.

"I am absolutely glad that there are people out there ... who are keeping the pressure on organisations like ourselves.

"I have absolute confidence in the staff, that they will be doing everything that they can to ensure that Norske Skog meet their obligations."

Norske Skog provided a statement to RNZ saying it is "aware of the environmental issues associated with the Kawerau site and its legal responsibilities", which it would honour.

It had been "completely open" with prospective purchasers about the environmental obligations.

Neighbouring company Oji Fibre Solutions says it is not the only one interested in Norske's assets.

"We recognise there are some potential environmental liabilities associated with parts of the land [Norske] may want to sell," Oji says.

It is committed to "full compliance" with the consents it had control over, whatever happened with the paper mill.

Oji recently spent $60m on upgrades, and ended many bleaching processes which it says cut in half some discharges to the Tawarewa River.

Tipene Marr is not reassured.

Now in his 60s, he learned from his father to campaign for the river, worked at the paper mill in his 20s then sat on the regional council for years.

"They should be made to show how they're going to clean up if it doesn't get sold," he says.

"The resource consent doesn't make them actually clean up all their pollution", he says, such as the grey sludge buried under pylons in the forests.

"They won't be told to clean up all little places all over the Kawerau region where they've dumped rubbish."

He was sceptical the council had the will to take on Norske Skog.

Treasury has told the government that regional councils have a conflict of interest in trying to regulate major industries that are big employers and spenders.

Tiipene suggested if Oji fully took over the resource consents "they should take over the pollution as well".

Norkse Skog is retaining its investment in a wood pellet manufacturer and he is confident it would meet its obligations, says Campbell.