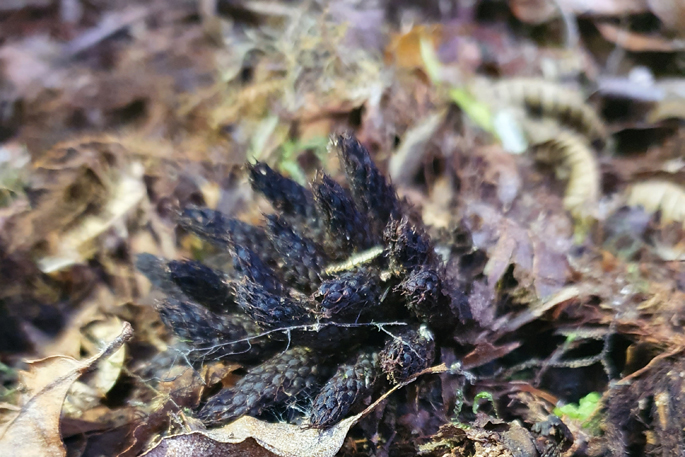 One of Aotearoa’s most unusual native plants has a more promising future following a successful flowering season.

Members of the Pirongia Te Aroaro o Kahu Restoration Society have worked alongside Department of Conservation staff on the recovery of Dactylanthus taylorii (puna o te rēinga) on Mount Pirongia since 2015.

The odds are stacked against this endemic plant due to the impact of introduced pests—particularly possums who eat the flowers— making intervention necessary for its continued survival in the Waikato.

DOC Waikato biodiversity ranger Cara Hansen has been working with the society on Dactylanthus recovery and has hand pollinated the flowers seeding this season.

“Around this time of year we start monitoring seed production and thinking about where these seeds will be sown if collected.

“Plants flower between early summer and autumn, and this season 30 of the monitored plants had female flowers which were hand pollinated over the summer.

“Hand pollination is an even more important task for volunteers this year due to the absence of rats following recent pest control efforts,” says Cara.

The work to pollinate the plants by hand is challenging as it involves finding Dactylanthus specimens, which is no easy feat.

The plant is well camouflaged in its environment, requiring a trained eye to spot it. It grows underground and when not flowering, looks just like the brown leaf litter it nestles amongst.

The first being they have a dioecious flowering biology which means there are separate female and male flowers. For successful pollination to occur, female flowers must be pollinated by male flowers.

There is also an absence of its natural pollinator—short-tailed bats (pekapeka) — due to local extinction.

Pekapeka are attracted to the strong musky scent of the flower and are rewarded with an abundance of nectar in exchange for transferring pollen from one plant to another.

Rats have also been identified as a potential pollinator of the plants but the success of recent pest control on the maunga— part of DOC’s Tiakina Ngā Manu programme—has reduced rat numbers.

“The hand pollination has been effective, and we are optimistic that by springtime we’ll have a good harvest of seeds,” says Cara.

“Each plant can produce tens of thousands of seeds which might seem like a lot, but the seeds take between four and seven years to germinate so it’s a relatively long wait to see any results.

“Once a seed germinates it attaches to a host tree root— typically pate or seven-finger, five-finger, lemonwood and putaputaweta— and covers it like a bottle cap.

“The tree root responds by developing the flared woody rose shape, giving it one of its common names.”

Cara says it’s very difficult to see whether plants are forming without disturbing the seeds or host roots, which means it could be more than four years to see any visible results above ground.

Dactylanthus is the only fully parasitic flowering plant in New Zealand. It derives all its nutrients from its host so has no green leaves or roots of its own.