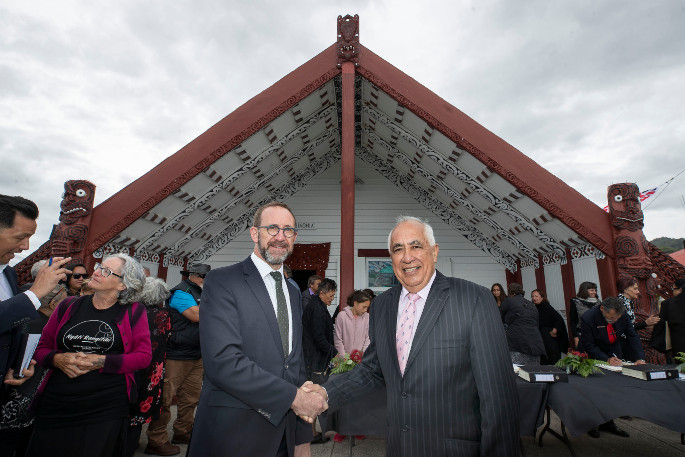 Minister for Treaty of Waitangi Negotiations, Hon Andrew Little and Te Mana Chairman and Lead Negotiator, Leith Comer at the signing of the Deed of Settlement. Photo: Supplied. Campbell Squared.

The next step in an $11 million deed of settlement signed by the Crown and Bay of Plenty iwi Ngati Rangitihi is about to be taken, with the opening of submissions on a bill relating to the deal.

The Ngati Rangitihi Claims Settlement Bill will record acknowledgments and an apology made to the iwi – which traces its origins to Te Arawa waka and has interests around Rotorua, Kaingaroa, and Matata – for breaches of the Treaty of Waitangi and its principles.

Significantly, it will also involve the transfer of 19 sites of deep significance to the iwi, including the former site of the Pink and White Terraces known as O-tu-kapua-rangi me Te Tarata.

Another important feature of the bill is that it includes provisions about the natural resources arrangement over the Tarawera River.

The settlement establishes the Tarawera Awa Restoration Strategy Group, which would operate as a permanent joint committee of the Bay of Plenty Regional Council.

The settlement deed was signed at a ceremony at Rangitihi Marae in Matata in December. The ceremony was attended by Minister for Treaty of Waitangi Negotiations Andrew Little, at which he apologised for the Crown’s mistreatment of the iwi.

Among the reasons for the Crown's apology were aggressive land purchases, failure to protect the “defiled, degraded and polluted” Tarawera River, and failing to stop Ngati Rangitihi from becoming virtually landless by 1900.

While the Te Mana o Ngati Rangitihi Trust had negotiated directly with the Crown since 2015, the journey started well before that.

Settlement documents refer to the iwi’s “arduous journey in pursuit of justice” and describe the Crown apology as long overdue.

The iwi will get financial and commercial redress valued over $11 million, a sum comprised of $4m financial redress and more than $7m through the Central North Island Forests Collective Settlement.

At the time of the apology, trust chairman and lead negotiator Leith Comer said no settlement “will ever be able to compensate for the mamae – hurt – our people suffered, but today represents the beginning of a new era”.

Those keen to have their say on the bill can make a submission to the Maori Affairs Committee, via the page on the New Zealand Parliament website, by August 4.