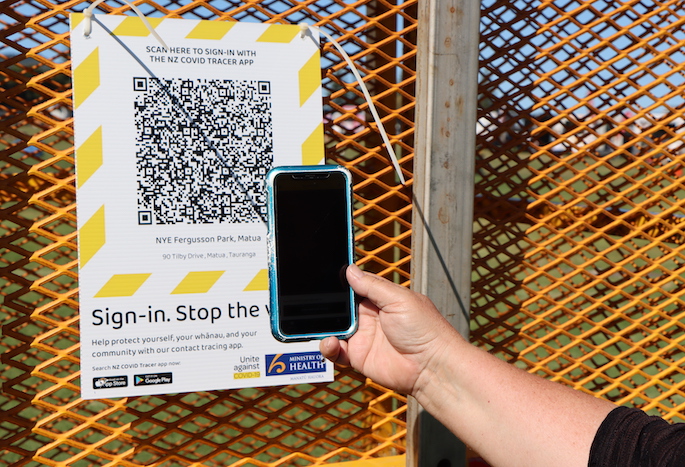 The government plans to consider advice on mandatory mask-wearing at alert level two and higher, and mandatory QR code scanning at high-risk areas.

Speaking at a post-Cabinet media briefing this afternoon Prime Minister Jacinda Ardern says Cabinet has commissioned advice on making QR code scanning mandatory at some high-risk locations and would look to consider that advice next week.

She says the government would also consider mandating face mask use in regions that were at alert level 2 and higher. Mask wearing is already mandatory on public transport.

"The rise of the Delta variant and the risk is poses to the Trans-Tasman bubble means it's timely to consider new measures for our toolbox to strengthen the bubble and reduce the risk of Covid spreading in New Zealand," she says.

"In order to get and keep in front of the virus, we need to be able to contact trace quickly."

Ardern says the Covid-19-positive Sydney traveller who arrived in Wellington had made thorough use of the Covid-19 app, and that had been valuable in tracing his movements and quickly identifying places of interest.

However, while about 2600 people were estimated to have been at those places of interest, only 585 alerts were sent out to people who had used the NZ Covid Tracer app, she says, suggesting only a third of potential contacts of the case had used the scan into the locations of interest.

Cabinet also met yesterday and agreed to extend Wellington's alert level 2 status until 11.59pm tomorrow. The pause on quarantine-free travel was also extended to all of Australia and will last for the same duration.

Wellington shifted from alert level 1 to 2 last Wednesday after a Sydney man who visited the region between 18 and 21 June tested positive for the highly infectious Delta variant upon his return to Australia.

His partner has also since tested positive, while New South Wales' cases continue to climb.

The rest of New Zealand remains at alert level 1.

You need to resolve your wife’s anxiety. Whether scanning is "mandatory" or not, it is still a "good thing" to do. Explain to her that this scan (which takes a second or two) can help to trace people who may have been exposed to the virus. It is helping to keep all of us safer. There have been over 300,000,000 such scans and NO-ONE has been negatively affected by them. In fact, they have been very useful in stopping the community spread of the virus. It is "safe" to use the QR code scan. They are considering making it "mandatory" because their thinking is flawed and they just want to follow Oz...(Who are world leaders in flawed political thinking...). Show your wife the process for scanning with your phone. She doesn’t have to USE your phone, but you should use the QR code tracing app.

What is the point of making the QR scan "mandatory" unless you make cellphone ownership "mandatory" as well? I don’t use a cellphone and I don’t want one... I sign in to places where there is a list, and, if I had a cellphone, I would certainly use the QR code. This is another example of well-meaning legislation NOT being thought through. It is like the people who suggest these laws have no vision beyond their own limited horizon... ("I’ve got a cellphone, so this can work...") Make it mandatory, and I will expect to receive a government funded cellphone in the mail. By all means, encourage people to make tracking easier, but don’t think that making ONE particular channel mandatory will improve that.

However my "cellphone" does not do "data" - just calls in/out and text messages!!! I have no intention of buying a NEW so called smart phone and paying for something that I don’t want/need for my day to day life. If the Gment wants to buy it for me and PAY for the "data" cost then - OK....... Oh and I think that 50% of the over 60/65’s have the same basic cell phone - calls and text !!!

My wife is concerned about, having to scan in, all the time. I’m disabled, with a smart phone & my wife has a dumb phone & she dont like my phone. Any ideas, please???

Yet another big stick being waved around by a government that is determined to dictate. Obviously the nation can’t be trusted to manage their own lives. A government hell-bent on talking down to the plebeian sheep that aren’t educated enough to make a decision for themselves. Our nation is doomed to a future of doing as we’re told and being grateful to people that have never done a real job after leaving university.

Desperate to crank up the scary level again. If they actually looked at the emerging data from the UK Government (Public Health England), it shows Delta is now the dominant strain, accounting for 99% of new infections, which are rising again (largely in unvaccinated people) because it is no doubt more infectious. However, the data also shows deaths and hospitalisation is steady and low. It has a mortality rate of between 0.1% and 0.2%, compared to 1.9% for the Alpha variant. So somewhere between 10-19 times less deadly. It is getting more like a standard cold/flu. Of course, they know this but with the woeful vaccine rollout they have to crank up the scary level and zero virus obsession, even though the evidence would suggest cranking it down. The PM said this morning the vaccine is not a silver bullet. True, it’s hardly necessary at all.