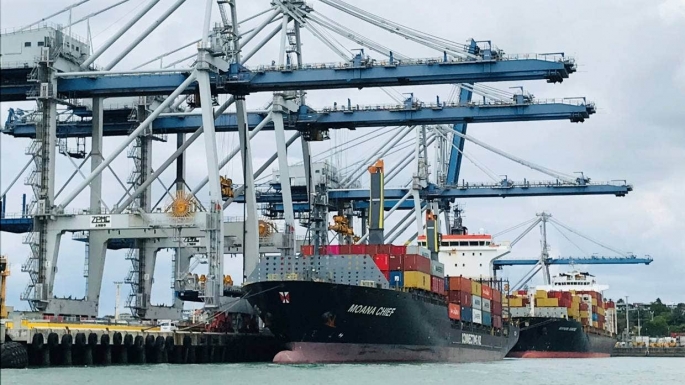 Schedule reliability at Port of Tauranga is at 5.52 per cent. File image/SunLive.

Shipping schedule reliability has plunged to a historic low of six per cent from above 80 per cent before the pandemic.

Numbers from Sea Intelligence show the full extent of port congestion and shipping woes. The delays were initially forecast to end after Christmas, but the numbers show things have only deteriorated since then.

Shipping reliability across all ports was running at 70 per cent in August. Which means 70 per cent of ships were turning up to ports on time. But this fell to 8.87 per cent in November, with Auckland at 9.57 per cent and Tauranga operating at 7.5 per cent reliability.

By April, the last month for which Sea Intelligence has provided statistics, schedule reliability in Auckland was running at 5.56 per cent and in Tauranga at 5.52 per cent.

​Craig says the Government is wrong to believe the assurances of shipping lines that they will continue to service New Zealand as global shipping chaos worsens.

“The market is a free market. They [shipping lines] determine where they go. They have no compulsion to come to New Zealand.

“There’s a lot of cargo through the Fonterra and Affcos of the world, but if you put all that cargo together and compare it to someone like Amazon or Ali Baba it’s a drop, it’s nothing.”

He argues sky-high container and freight rates on lucrative routes between Asia and the United States could eventually prove too much of a lure for these companies, and they may severely cut back their services as time drags on.

Ports of Auckland spokesman ​Matt Ball says there are multiple causes of delay. They include weather-related port closures on our east coast. There are also known delays in Singapore, industrial issues in Australia and major disruption happening at the port of Yantian in Southern China.

​Napier Port chief executive ​Todd Dawson says 40 container ships have missed their scheduled calls at the port in the eight months to May 31. However, the port also has had 23 ships call in unscheduled.

Centreport spokesman ​John Tulloch says Wellington has experienced “choppiness” in schedules, while Port of Tauranga spokeswoman ​Rochelle Lockley says the company does not expect shipping schedules to improve while delays persist at ports like the Ports of Auckland.

​Craig says ships facing reliability issues will come under pressure to skip ports, or not visit New Zealand at all.

Delays at New Zealand ports have to be made up by burning more fuel, something which can be an expensive exercise on some of the larger ships. A ship not making it to a larger overseas port in time can be a big deal, because overseas ports offer these ships set time windows in which to dock and unload.

This is why he says the Government should look at setting up a government shipping line, or support New Zealand-flagged carriers to ramp up their capacity to deliver coastal shipping.

Transport Minister ​Michael Wood says he is keeping an open mind on solution to the crisis, but has no plans to subsidise sea freight in the way airfreight is subsidised.

These lines are also granted an exemption from having to comply with local labour laws if their ships only stay within our waters for a specific period of time, which ​ Craig argues stifles domestic competition from taking off.

He suggests KiwiRail could lead a New Zealand shipping service, since the Interislander ferry already operates as a freight shipping service between the North and South Islands.

For a domestic coastal shipping industry to be sustainable,​ Craig says we will need to get rid of the exemption for foreign shipping companies from local laws.

Sea Intelligence chief executive​ Alan Murphy, who provided the figures on shipping reliability for New Zealand ports, says when the statistics were first collected from ports “omits” were left out.

This means these poor shipping reliability figures do not capture instances where shipping companies have simply not decided to turn up to certain ports, a feature Craig says is becoming more common too.

... then, amidst the general wailing and gnashing of teeth, ask why no-one foresaw it or tried to get something done about it... Craig is talking observable common-sense. But still the Minister prevaricates.

Maybe we’ll get rid of 90% of the ’crap’ we purchase at the same time. Get it down to bare essentials.

The good old days when the Maritime Union had stop works on the interisland ferries every holiday period....................