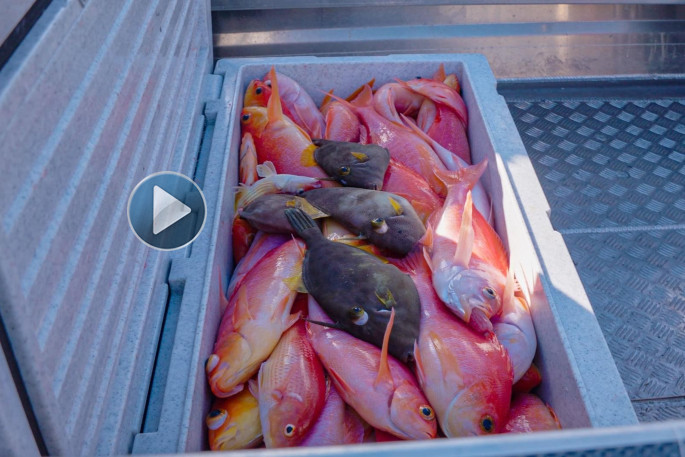 Pink maomao in a bin on board one of the boats filmed at the Tairua Wharf on Thursday.Photos/Video: Mike Bhana

A Tairua resident is warning other coastal communities to be on the lookout following fishermen being filmed coming ashore with thousands of pink maomao fish.

“There is a poaching ring in Tairua at the moment,” says local resident and wildlife documentary maker Mike Bhana. “On Thursday there were 12 boats with about two and a half thousand pink maomao.

“These people have been doing this four days a week. They drive down from Auckland, fill up the bins, drive out and come back.”

Mike says he saw four boats with 12 bins of fish.

“There have been another eight boats come in since I left the ramps. All with pink maomao. One of the fishermen admitted to selling and said ‘how else do I pay for my motor’. This needs to stop. We do not need this sort of complete disregard for our marine environment happening in our town," says Mike.

“There appear to be about five to seven that are regularly coming down and doing this and appear to be organised as one group.”

Mike says one of the locals has been recording licence plates.

“He says every time its calm there are always five here.” 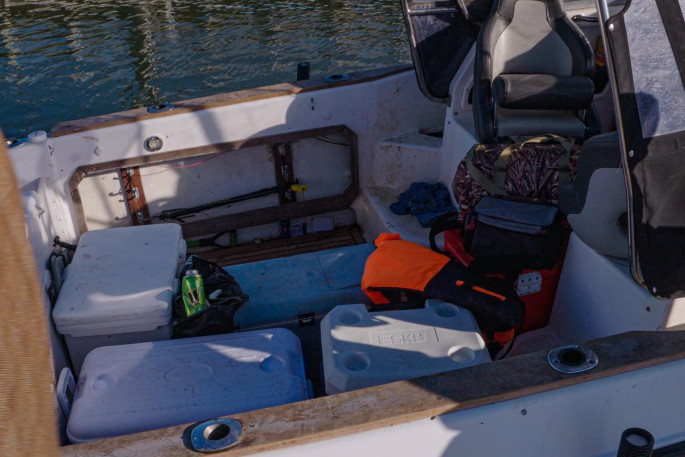 Mike says a loophole in the legislation is being taken advantage of. His change.org petition requesting Government urgently address the situation has received over 3900 signatures.

“I like to think that most recreational fishermen like myself understand the need to protect our fishery so we can catch fish tomorrow,” says Mike.

“In addition we have rules to limit our take for those who might think it okay to take more than their share. But there is a hole in our current regulations that means you can take as many fish as you want if the species is not on the Ministry of Primary Industry’s recreational list. This list for the Auckland/Northland area consists of just 24 species. It is legal to take a tonne of blue maomao for instance.”

Ngati Hei spokesperson Joe Davis has placed a rahui over the fishing area, which is viewed as a temporary measure until Government takes action to protect the fishery.

“This came to my attention at the launch of the crown’s response to seachange on Tuesday,” says Joe. “There was a brief discussion with Legasea representatives about their concerns and it was brought to my attention then.”

Joe says the discussions with the Legasea fishing lobby group were about other fish species as well and included the pink maomao concerns.

“Then this video came out and went viral amongst Hauraki and Tairua people. It certainly brought home the absolute disgust at what is going on,” says Joe.

“We’re seeing black marketing, and flouting legislation that is inadequate in terms of the protection of those fish that aren’t on the lists that are legally fished by commercial fishers.

“From a customary point of view, it’s just not done. The recreational fishers will be feeling the same thing. We’re all abiding by the rules - the commercial guys, recreational guys and tangata whenua - and here we have a group that have seen a loop hole and a way that they can exploit a certain species of fish that appeals to their own palate so they’re going to exploit it to the max until every last fish has gone.”

Joe says the fishermen are there four days a week.

“They unload, then return, fish, unload.  Their comings and goings have been watched by the local Tairua residents.”

Joe says there will be “a lot of issues that are going to fall out of this particular case”.

“For example, I don’t know if they are hiring charters. Technology has to be to blame in this as well, as obviously they are targeting schools of fish. I would say, they are getting advice off skippers for where to go for these pink maomao and the technology they have on board," says Joe.

"The charter operators have inadvertently led these people to the fishing hot spots," says Mike. "They use GPS to mark the spot so they can return."

“Then there is the black marketeering,' says Joe. "The absolute exploitation of a loophole in current legislation that should protect a valuable resource. Obviously it’s been under the radar for a long, long time and now it’s been brought to everyone’s attention.”

Joe says that the fishermen on the video were blatantly saying they would sell the fish, with one mentioning he wanted to pay for his motor.

“These guys are flouting a set of values that New Zealanders dearly abide by. Some of those species are heading towards extinction,” says Joe.

Mike says a fishery officer came Whitianga on June 18 and on lifting the chilly bin lids, saw there was a lot of maomao caught.

“And there was a fishery officer here on Friday after the stink I kicked up on Thursday,” says Mike. “But they can’t do anything legally. They can check the catches coming in.”

He says other coastal communities around the Bay of Plenty and Coromandel need to be made aware of what’s happening.

“Tauranga and Whangamata need to be aware, if we’ve scared them off here, given the value on the black market – we may have displaced them from here but they’re not going to stop fishing elsewhere. Someone else’s backyard is going to get hammered,” says Mike.

“There are recreational boats out there right now targeting species outside the MPI recreational fishing list and returning with hundreds and hundreds of fish. This is not okay and we need a law change immediately before some species are fished out.”

Mike says the rahui placed by Joe over the area is to protect the fishery in the short term.

“But we shouldn’t have to do this, it should be the job of central government to manage our resources.”

He is concerned that locals may take action resulting in altercations with the fishermen.

“With communities getting mobilised, there is the potential of outbursts and people getting assaulted. We need this being managed by central government and fisheries. The fisheries law needs to protect our communities from over fishing. We rely on this resource in our backyard and to protect our children’s future.”

The Ministry of Primary Industries - MPI - is investigating. MPI has catch limits for around 25 species, however the pink maomao is not regulated by MPI.

Your "Hate Speech" quip made me smile, thanks. But, at the same time, it might not be as far from the truth as we would like.

Your "Hate Speech" quip made me smile, thanks. But, at the same time, it might not be as far from the truth as we would like.

When I look for issues. I look towards the origin as much as possible. Maybe if commercial fishers hadn’t wiped out the traditional target species close to land. No-one would feel like they had to and there wouldn’t be a market for maomao. If people could sustain themselves without this...I believe they would. If we could still fish off the wharf or rocks for a nice pan sized snapper instead of buying from the shop. I def would.

so now they are threatning bodily harm and damaging private property. just who the h--- do they think they are. they better not try and stop me or damage my property if i go fishing from there.

Where Are The Lawmakers?

What is going on? Where are all those people who know what is best for us? Implementing the ridiculous Motiti Protection Area that’s where. I’d best not say any more. I might get a life sentence for Hate Speech.

how can one person stop anybody from fishing

...needs to be changed and it should be done quickly. The greedy idiots who do this need to be curbed and jail sentences might help.

It is your hands

The reality is that with this amount of fish being brought ashore it can amount to $13,000 retail per load. If that is not a commercial operation then what is, MPI get off your shiny ass and put a stop to this before someone takes matters into there own hands, To say you have no power to do anything about it is BS.

Those of us that go fishing have known for many years which groups of people plunder the oceans regularly. I find it extremely interesting that this story comes hard on the back of the government announcement regarding naming and shaming (or voicing an opinion as I prefer) but we should also understand that other loopholes are used around our coastline with impunity.