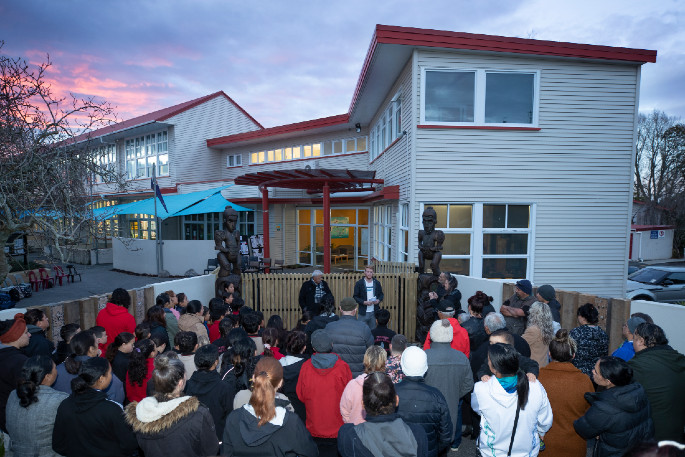 Members of the community gathered for the blessing at Gate Pa School. Photos: John Borren.

It was a crisp still morning at Gate Pa School on Tuesday as members of the community walked through the gates for a very special unveiling.

At 7am, just as the sky was beginning to lighten, a formal blessing of two Maori poupou and the opening of the school’s new entrance way was carried out with teachers, students and whanau looking on.

Gate Pa school Principal Rochelle Jensen says the front entrance is significant as it “reflects our cultural narrative and tells our story”.

The idea for this project was born from a community consultation in late 2019, where two messages were heard loud and clear.

Rochelle says those messages illustrated that the “high quality of the Kura was not reflected from the outside” and the entrance should reflect “who we are, where we stand and the history of Aotearoa”.

“In shaping the future we must start with the past,” says Rochelle.

“The vision reflected in these ideas has physically taken shape over the last six months and will continue with the addition of an electronic sign, fencing around the perimeter and plaques explaining the narratives of the poupou.

“Whilst much mahi has occurred, from here a new type of mahi will begin. As first and foremost, in reflecting the voices of whanau and the bicultural foundations of Aotearoa, it is important that all of our tamariki leave here knowing about the land in which they stand, the stories, the history and the treaty obligations.

“Secondly, as a Kura who embraces and celebrates cultural diversity, all our students will be given the opportunity to develop their understanding of their own and others’ language, culture and identity.”

Creator of the poupou, Whare Thompson, says the carving, which is made from swamp kauri, is representative to the school as well as to Pukahinahina - Gate Pa.

“The carvings have two figures at the top of them; a male and a female figure,” says Whare. “They represent two local ancestors, Rauhea Koikoi and Matatu.

“The two figures are performing a powhiri -welcoming. Matatu is doing a karanga and her husband is performing the wero, a challenge as part of the powhiri protocol.

“Beneath them are four heads. These four heads are ancestors that are related to the Battle of Gate Pa and are also the four names given to the school houses.”

Whare says the carving took about ten weeks to complete from start to finish. 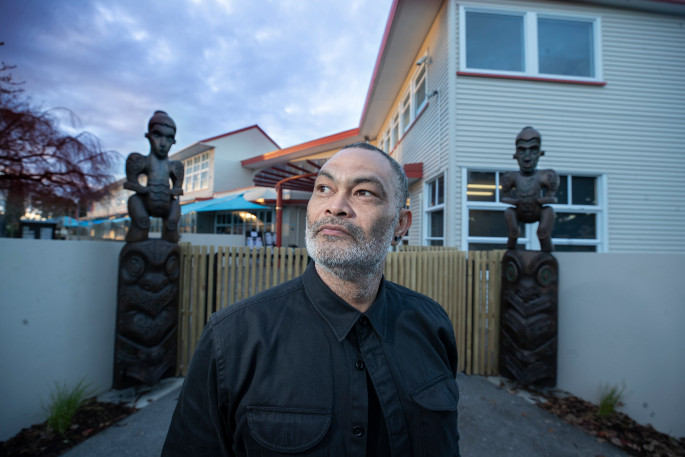