Links Ave cul-de-sac gets go ahead 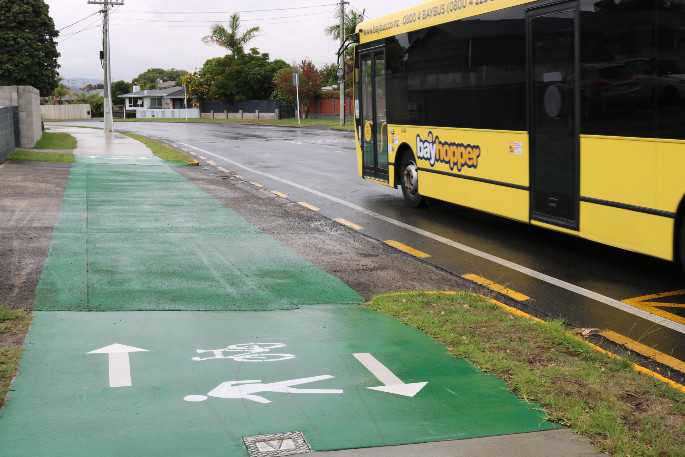 Tauranga City Council will push ahead with plans to trial a cul-de-sac traffic system on Links Ave after commissioners approved the recommendation at a council meeting today.

This is despite an admission from commissioners and Council that the implementation will have a detrimental knock-on impact to other roads in the area, such as Maunganui Road and Oceanbeach Road.

The decision comes after a safety review into transport along the road identified it as the only viable option to measurably improve safety with a “tangible risk” currently present.

Safety concerns have previously been raised from residents along Links Ave, which is home to Mount Maunganui Intermediate School.

Commission chair Anne Tolley says she is a regular witness to the rat run traffic along Links Ave and admits the decision may mean extra minutes to her own commute. However, if it means a safer road, especially for school children, she believes the sacrifice is minimal.

“The safety of those kids is paramount and it gives us the opportunity to trial some things,” she says.

“I am a motorist who uses those roads every day and, quite frankly, if it costs me another four minutes or five minutes to get to work as against the serious injury or the life of a schoolkid I’ll take the extra time.

“I think most reasonable people will do that.”

Brendan Bisley, Tauranga City Council director of transport, admits finding a solution is not easy but that reducing traffic volume along the route is the only viable option.

Removal of the bus lane, as some residents have previously suggested as a solution, would not have the desired impact, he says.

Commissioner Stephen Selwood agrees with the direction being taken and echoes Tolley’s view that safety must be the paramount consideration.

However, he admits that the response from some in the community could be “vociferous” in opposition.

“The issue of a five or ten minute delay on neighbouring roads (is) a key consideration though, so we also need to understand the views of the users on that corridor.”

He also states the situation is one of those that is “impossible” with “no answer that works for everyone”.

Shadrach Rolleston highlights that Links Ave is not an arterial road and is a residential area.

“People live on these streets,” he points out.

“They are not arterial roads. People live here and children go to school here.

“We are trying to put this community first while we have got wider issues across the network.”

Per the report presented to commissioners, any trial could be implemented quickly.

However, council have confirmed that the trial will not be implemented without the consultation with the community commissioners have approved.

The recommendation to commissioners highlights a trial period would be likely to last at least six months.

Traffic is likely to increase along Maunganui Road and Oceanbeach Road as a consequence of the cul-de-sac on Links Ave, with council predicting an additional 2000 vehicles per day on each road.

Installation of a permanent cul-de-sac could cost an estimated $500,000 to $1 million, dependent on its location, according to a council staff report.

Other actions currently in progress to improve the safety along Links Ave include the recently approved heavy vehicle ban in some Mount Maunganui residential areas, the installation a 30km/h variable speed zone in the vicinity of Mount Maunganui Intermediate School and an additional pedestrian crossing on Golf Road.

You have got to be joking!

Just exactly who keeps coming up with these insane ideas? and what’s worse why do they get implemented without even getting challenged & discussed? The fastest growing city in NZ, potentially has up to 750 young people per month obtaining a drivers licence. Plus new people arriving... less a few that leave the city. So how can reduced roading capacity hope to process hundreds of additional drivers per month? Until the BIG choke point of Hewletts/Totara is fixed the tailback of traffic is going to continue to grow, no matter which road you funnel the vehicles down or away from.

Tauranga City Council will push ahead with plans... No...really? What a surprise. Thanks for the admission though that they in fact do not care about the after effects of the decisions they are making despite all the opposition from the people that pay for it.

"This is despite an admission from commissioners and Council that the implementation will have a detrimental knock-on impact to other roads in the area, such as Maunganui Road and Oceanbeach Road." So what does this say ???? The LABOUR Gments appointed commissioners are NOT working for or interested in the "local" residents !! JUST those that make the most noise !!!

I get why there is a need to sort out Links Ave. Just put it back how it was until you have Bayfair/Oceanbeach Road sorted. Jeeez its not rocket science. Forcing more cars onto SH 2 and Oceanbeach is just stupidity.

Making changes to cater for pedestrians that step into the road without looking or using a designated crossing. It’s a road. They tend not to be safe for pedestrians. How is that teaching kids responsibility? Sheer lunacy.