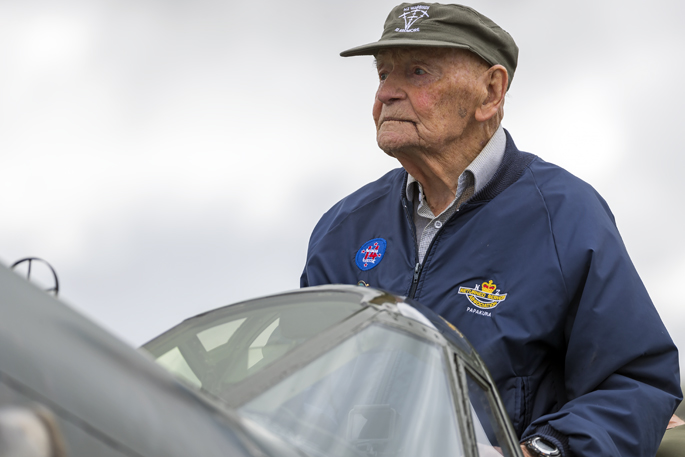 Bryan Cox will be remembered as a as a real gentleman and teller of many stories. Supplied images.

A Kiwi aviation legend, who inspired and taught hundreds of pilots, has taken his final flight.

Tauranga’s Bryan Cox passed away on Saturday, June 12, after suffering a stroke a week earlier.

The 96-year-old has been dubbed an “absolute aviation, loveable legend” by Trish Reynolds, the general manager of NZ Warbirds Association.

“He belied his years and always had a twinkle in his eyes,” she says.

Born on January 15, 1925, Bryan’s passion for flying started young. He grew up on a farm near Cambridge, and in 1935 the family moved to Te Rapa, where he attended Te Rapa Primary School before moving on to Hamilton Tech.

It was here his interest in planes was piqued. It was 1940 and his English teacher “Gummy Martin” had the walls covered with pages from the Illustrated London News, of shot down German aircraft, Spitfires and Hurricanes.

With World War II in full force and most of the school’s teachers lost to the services, Bryan left school and started working at Bank of New Zealand in 1941.

That same year he joined the Air Training Corp. Parades were held on Saturday afternoons and he never missed one until he was old enough to join the Royal New Zealand Air Force in May 1943.

“The day I turned 18, I asked my parents to sign my application to join the Air Force as a pilot, which they signed without comment,” Bryan wrote in his book Too Young To Die.

After training, in November 1944 he was deployed to the island of Guadalcanal in the Pacific Ocean.

Here Bryan conducted patrols over Rabaul, a Japanese stronghold, as a Corsair pilot. 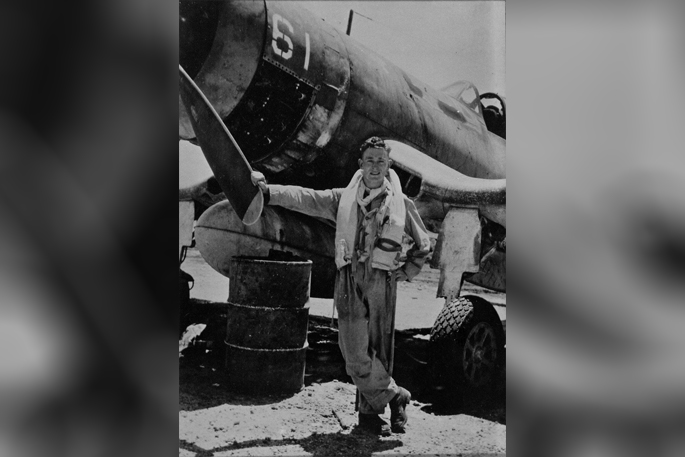 On Bryan’s 20th birthday, January 15, 1945, he was rostered off flying, but was summoned for a rescue mission after a pilot was shot down.

He and three others flew to Rabaul to try and rescue the pilot, but they were unable to complete their mission and had to leave him to the mercy of the Japanese.

On their return, with dusk approaching, Bryan noticed another formation of 12 Corsairs below.

“Approximately halfway back to Green Island there appeared in front of us a jet-black tropical front stretching right across the horizon and down to sea level,” he wrote.

Being low on fuel, he knew he had to get back to the airfield at Green Island, the coral atoll where their squadrons were based.

Disoriented and unable to see anything other than the navigation lights of the aircraft in front, Bryan resided to his fate.

“I felt that my ‘moment of truth’ had arrived, with my chances of ever seeing Green Island again being nil.

“I was still trying to decide whether to jump or wait it out and ditch when there was a brilliant flash of lightning; unbelievably below I glimpsed the familiar jungle-clad coastline of Green Island.”

The pilot credits his Corsair and that flash of lightening for saving his life. Eight other pilots never returned.

The day has been dubbed Black Monday in New Zealand war history, and is one that stuck with Bryan. He recanted the tale not only through his book but to many comrades throughout his life.

His brother Grant and four other extended family members died in WWII.

Bryan’s close friend John Kelly says those losses and Black Monday had quite an impact on him.

Life after the Air Force

Bryan was demobbed from the RNZAF in 1947 and within three weeks was back working at the Hamilton BNZ.

He married his late wife Wynne in 1947 and they had four children: Joanne, Wanda, Sandy and Greg.

The itch of aviation never left, and in 1963 Bryan became an air traffic controller at Ardmore Airport.  While based at Ardmore he trained to be a flying instructor and started Manukau Flying School in 1966. Bryan trained countless pilots and had 21,145 flying hours under his belt by the time he retired in 1993.

John met Bryan in 1985 while he was training for aerobatic flying. Bryan, being the chief flying instructor, had to sign off on John’s skills.

“I flew with him a few times, always doing aerobatics,” says John. “One day he said to me ‘it doesn't matter how many birthdays you have had, you are always too young to die’,” says John.

“I thought it was just one of Bryan's pearls of wisdom until I found his book of the same name,” he laughs. 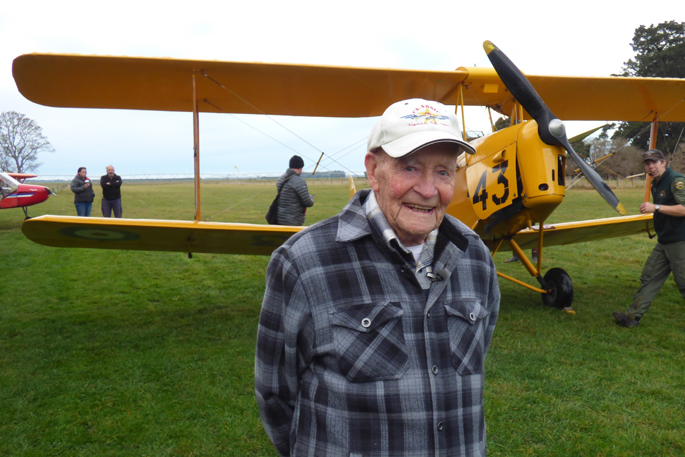 At age 93, Bryan flew a Tiger Moth he had flown 75 years earlier while training in the RNZAF.

The pair also realised they had a mutual link to Black Monday; John’s step-father Ray Offen was in the 14th squadron and Bryan was in the 16th. Both men flew that day, but Ray was on the right side of the weather front.

This connection lead them to document both accounts for the NZ Warbirds Ardmore Visitor Centre.

Bryan has written three books, has his own website and donated many of his photos and memorabilia to NZ Warbirds Association and Classic Flyers in Tauranga.

“He had a passion to give insight and make sure what was told was accurate,” says fellow history buff John.

Trish says he was famous for his flying displays at shows during his time at Ardmore.

“He would get airborne in a training aircraft, such as a Cessna 152,” she recalls. “He would do aerobatics and then shut the engine off, feigning he’d run out of fuel. He would then finish his display, land and taxi up to the fuel pumps with the engine shut off.”

Bryan flew recreationally after retiring to Tauranga and was one of New Zealand’s oldest pilots when he received his recreational pilot licence at age 93.

He still had the stomach for aerobatics in his 90s, and there is footage from the Tauranga Aero Club of him flying upside down at age 92.

A true aviator until the end, Bryan will live on through the legacy of history and training that he gifted to so many.