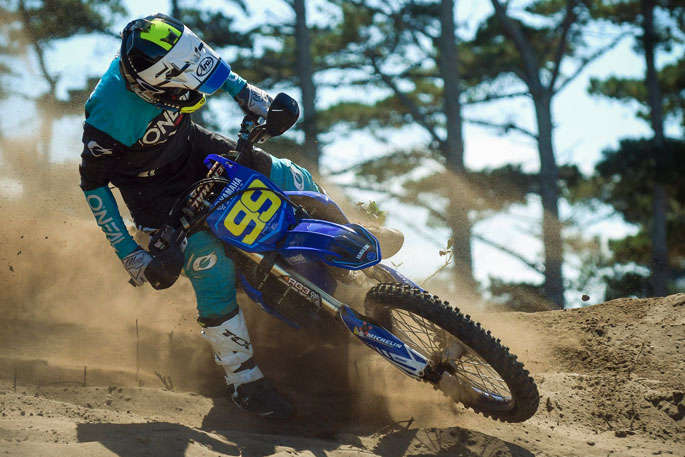 Palmerston North's Paul Whibley (Yamaha), likely to be among the frontrunners in the senior Dirt Guide race next Saturday (June 26). Photo by Andy McGechan, BikesportNZ.com.

Forestry land halfway between Tokoroa and Taupo will shortly be the site once again for some of the country's best dirt bike racing action.

The 2021 edition of the popular Dirt Guide Cross-country Series kicks off in just under a week's time, on Saturday, June 26, with the leafy venue at Ohakuri once again set to thrill and challenge riders in equal proportions as they hunt down trophies and product prizes.

Perhaps our next national champion or international hero will be among those in action in the forest, the challenging terrain at Ohakuri signposted from Atiamuri on SH1, midway between Tokoroa and Taupo.

The 90-minute junior race is set to kick off at 9.30am, while the two-hour senior race will start just after midday.

The three-round series again promises to be anything you want it to be ... a serious competition for New Zealand's elite dirt bike racers, a challenging afternoon's ride in the bush or just a leisurely cruise along pine needle-laden forest pathways.

It will appeal to all-comers, but don't be fooled by the varied skill-level aspect of the series, because it is precisely events such as this that have created, inspired and nurtured Kiwi cross-country racing talent over the years before setting some of our brightest young talent on a pathway to top-level international competition.

Several Dirt Guide race winners from the past, riders such as Manawatu's Paul Whibley, Howick's Liam Draper, Titirangi's Callan May and Te Awamutu's Rachael Archer, to name a few individuals, have all raced internationally in recent times, or currently do so, and they can each trace their beginnings to dirt bike competitions such as this one.

Round two for the series is set for the same course the following month, on July 24, and the third and final round of the series is on August 21, also at the popular Ohakuri venue.

For each of the three rounds, a trail ride will be held at the same venue the following day. The trail ride on Sunday, June 27, will offer mostly different trails than those traversed on Saturday and it will also be twice as long.

The event is also an ideal opportunity for the lesser or novice riders to learn from the masters and the following day, Sunday, may also be a chance to hone those skills with a trail ride planned for the same venue.

“There has been a lot of logging going on at Ohakuri, so it will be using same area of land but it will be entirely different,” says Dirt Guide Series organiser Sean Clarke, of Tokoroa.

“There's some flowing stuff that has never been used too, bulldozed tracks like what riders would encounter in most cross-country races and it's free-draining land, so rain won't cause too much of a problem on the course.

“We want all dirt bike owners to come and have a go at this.

“With riders getting older every year, we are really keen to provide an experience to entice the younger riders to come along and ride. There are classes for riders as young as seven.

“Only a few people ever win races like this, so it's not really about the winning, but about participation.”