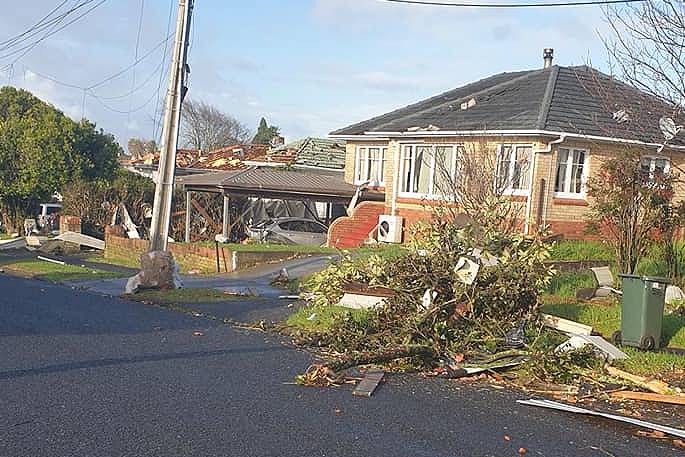 A metereologist says New Zealand does not currently have the technology to predict tornadoes like the deadly one in Auckland this Saturday. Photo. Sheryl Hogan.

Meteorologists say predicting tornadoes is difficult and New Zealand does not have the technology to do it.

A tornado ripped through Papatoetoe and Wiri yesterday morning, damaging 1200 homes, 60 of which are uninhabitable.

A worker at a container freight hub in Wiri died in the high winds and two others were injured.

MetService had issued a thunderstorm warning for the area but in response to questions about why it did not forecast a tornado it said it does not have a warning system like the United States does.

"Our technology in terms of our numerical weather forecasts are getting better, but then there's the real practical challenge of putting out warnings when tornadoes are actually occurring.

"In New Zealand they're very short-lived so by the time you get them out often the event has passed.

He says such technology could be developed in time.

"I think there's possibilities that with better computers, faster processes and the ability to resolve more detail in thunderstorms that we might get better at identifying which ones might be potentially more able to produce a tornado and what sort of intensity they would be.

He says a lot of tornado activity went unreported because it happened in remote areas.

"So that's really quite difficult [when] you're wanting to develop forecasting techniques from numerical weather predictions or the like, you need to have really good data to backup your learning.

Meanwhile, the government is contributing $100,000 to support communities affected by yesterday's tornado in Papatoetoe, South Auckland.

"My heart goes out to the family and friends who have lost a loved one, and to those who have been injured," says Acting Minister for Emergency Management Kris Faafoi in a statement.

"I know this has been a distressing weekend for people in Auckland, with many lives disrupted, and many homes and businesses damaged."

I agree. $100k is nothing at all. Overseas disasters are given millions. We were literally 2 streets over from this and apart from absolute torrential rain we heard and saw nothing. We were absolutely gobsmacked when we saw what had happened. $100k isn’t even enough for 1 street. What an insult. The carnage is HUGE.

I am surprised with the measly offer of $100,000 for assisting the poor unfortunate people. I am further surprised council workers/contractors start cleaning up today. Obviously still only work Monday to Friday.

I can feel insurance costs rising for everyone. Regardless of the chances of this happening. Insurance companies do not care about anything but their profit margin.