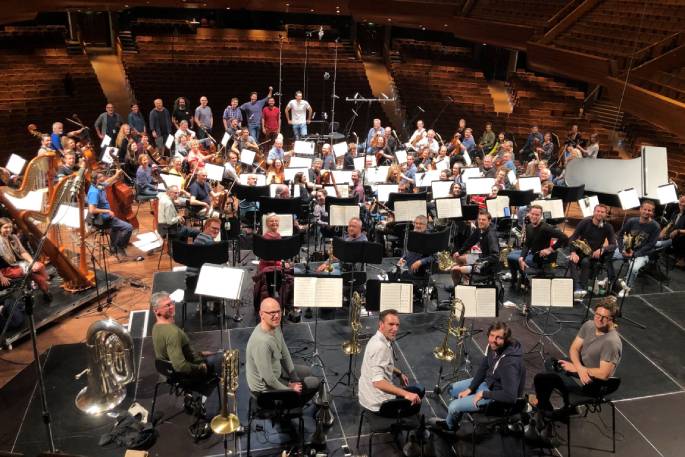 The New Zealand Symphony Orchestra is the music powerhouse behind the soundtrack to the new animated movie ‘Wish Dragon’, the No.1 movie this week on streaming giant Netflix in New Zealand, and in many other countries, including the United States.

The soundtrack to the family-friendly feature was performed and recorded in Wellington in late 2019, with Wish Dragon composer Philip Klein also conducting the NZSO.

Philip is a highly regarded Hollywood composer and orchestrator. He previously worked with the NZSO on the films ‘Emperor’ and ‘Mr Pip’.

His recent credits include orchestration for the movies ‘Joker’and ‘Fantastic Beasts: The Crimes of Grindelwald’, and Disney+ Star Wars spinoff ‘The Mandalorian’.

Wish Dragon was released in cinemas in China in January, where it reached number four at the box office. By being released elsewhere on Netflix, the Sony Pictures Animation feature, co-produced by Jackie Chan, will have a potential worldwide audience of more than 200 million.

NZSO chief executive Peter Biggs says the national orchestra is known for excelling with the best film composers and orchestrators to deliver first-class film soundtracks. To be chosen for Wish Dragon will further cement the NZSO’s reputation with film-makers and composers.

“The NZSO has a proud history of performing on film soundtracks heard by millions of people around the world, including Peter Jackson’s The Fellowship of the Ring, two instalments of The Hobbit, and Mortal Engines,” he says.

“We’re very excited that with Wish Dragon released on Netflix, potentially millions more people will again hear the NZSO, including many for the first time. You could say it’s a wish come true for us!”

Peter says numerous orchestras around the world vie in a highly competitive industry to perform film soundtracks. Wish Dragon was another vote of confidence from international film-makers on the NZSO’s expertise.

“Once work on Wellington Town Hall and the new national music centre in the Capital is completed, the NZSO will be able to perform and record even more soundtracks. The opportunities are limitless.”

Wish Dragon composer Philip Klein in interviews has praised the NZSO for its contribution to the film.

“They are a full-service film-scoring orchestra and they’re incredible,” he says.

“They are a proper orchestra, and the benefit of working with an orchestra that plays together is that they can come together so quickly as an ensemble … I also think that personality-wise, they’re a great fit as an orchestra for a film like this because they’re very laid back, they have a lot of fun, but they’re incredible, impeccable players.

“We had magical sessions. They played their heart. I’d always go back [to New Zealand] in a heartbeat, because I love those players and the ensemble. Also, the organisation is amazing. They go out of their way to make you feel welcome.”

To listen or download the Wish Dragon soundtrack go to https://soundtracks.lnk.to/wishdragon