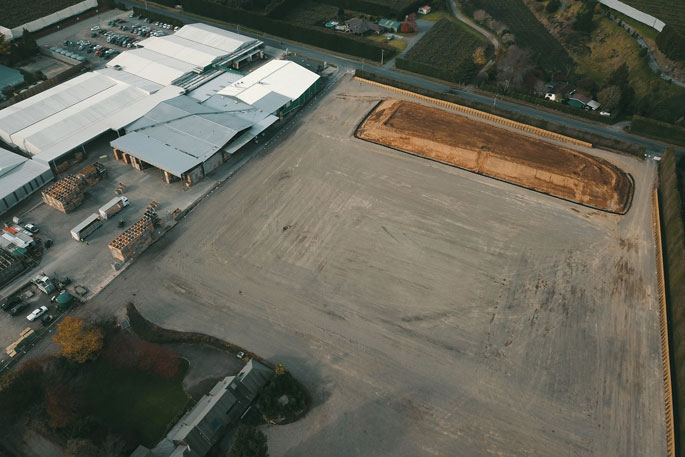 An aerial view of the new packhouse development underway at DMS. Supplied photos.

Te Puke’s economy is about to receive a $40m cash injection as DMS Progrowers Ltd unveils plans to double the size of its existing local operation – the biggest single investment the company has ever made.

DMS CEO Derek Masters confirms Te Puke businesses and contractors will be used for the majority of the expansion project.

"It’s important to look after your own. Te Puke builders, plumbers, electricians, refrigeration specialists, earthmovers, lighting, fire systems, concrete and paneling supplies, along with utility and services’ installation and other professionals and trades, will be used in all cases.

"We strongly believe in keeping things local and supporting the businesses that are based right here in Te Puke."

DMS is the first post-harvest company since 2018 to build a completely new packhouse in the Bay of Plenty, as the region continues to produce record-breaking kiwifruit crops.

"The industry is growing a significant amount of fruit – estimated at 178m trays this year – and that is only going to increase as more greenfield developments and Gold conversions come on stream.

"In the next few years demand for Gold kiwifruit worldwide will continue to rise and so DMS wants to grow its share of that anticipated industry growth.

"Packhouses around the Bay are already working 24 hours a day, seven days a week, during the limited Gold harvest window. Investing in more automation is important but eventually you just need more physical space.

"After a year of planning and design, we’re now excited to start building the second packhouse at our Te Matai Road site in Te Puke. This is a big thing for us, and a big thing for the town."

Once the new packhouse is completed, the company will have doubled its packing capacity at Te Puke to around 12m trays per year, increasing overall packing capacity to 20m trays company-wide.

Dave Pharo, DMS Pukepack’s site manager, says the new development will have a temperature and humidity controlled bin store which will jointly feed both the old packhouse and the new one.

"The four additional coolstores, with a static capacity of 1.5m trays, will be automated with shuttle racking technology which we use in our other coolstores on site."

State-of-the-art MAF Roda camera grading equipment will be installed, with technicians due to fly out from France early next year to commission the new packing line.

"The second packhouse shed will naturally require additional staff to operate – so that’s a lot of new jobs for local residents as well. The new facilities will all be operational prior to the start of next season in March 2022," Pharo says.

DMS purchased a 7.5ha site from an immediate neighbour early last year and re-zoned the land for post-harvest activities.

Over the past few months, Te Puke company JMC Earthworks has excavated 35,000m³ of dirt to help construct a flat building platform for the new packhouse.

Tenders for the lead packhouse/binstore building contract are now open.

Masters says as this season has progressed, DMS has noticed a lot of frustration amongst kiwifruit growers about whether their fruit was going to be picked and packed in optimal time because every single post-harvest operator was flat out.

"Next year, when we have this additional packhouse, we’ll certainly be able to provide more packing slots and help a lot more growers.

"This $40m development will also give confidence to our existing DMS growers that we will have capacity to look after their future growth as well."