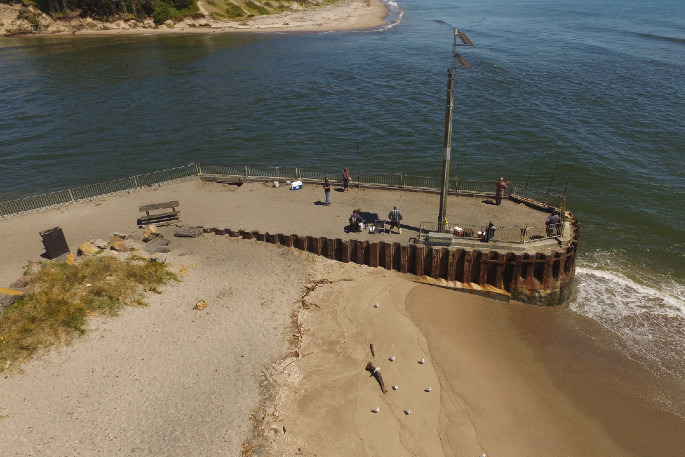 Joebert Dumangon died and his friend was hospitalised after their boat capsized trying to navigate the Kaituna Cut bar on Saturday. Image: Bay of Plenty Regional Council.

Whenever Joebert Dumangon wasn’t working, he was most likely fishing.

The 50-year-old worked hard to support his three children and family back home in the Philippines. His friends say he regularly put in six-day working weeks at his job as a heavy equipment operator at HEB Construction.

More hours meant more money to send home. Dumangon supported a lot of people. They relied on him.

Fishing, therefore, was his weekend escape. His break from work.

But last weekend he went out on a boat and didn’t come back.

As Dumangon and a friend tried to cross the Bay of Plenty’s most dangerous bar on Saturday morning – the Kaituna Cut – their small boat was hit by large waves and capsized.

Emergency services were called about 11.45am and a rescue mission was launched.

When the Maketu Coastguard arrived, they found the overturned hull of the boat about 200m offshore in the wave break.

One person could be seen clinging to the hull. There was no sign of a second person.

Dumangon was eventually pulled from the water by rescuers, he was given first aid and CPR, but he died a short time later.

His friend made it to shore and was taken to hospital in a serious condition. He survived.

Neither men were wearing life jackets.

Tauranga has a large, close-knit Filipino community and news of Dumangon’s death filtered out as many were attending a Philippines Independence Day celebration on Saturday.

When Dumangon first arrived in Tauranga, after spending a few years working in Christchurch, he moved in with Ello and his wife and lived with them for about two years.

Another friend, Jeffrey Bauyon, said he had “a lot of happy memories” with Dumangon.

Bauyon, 41, also lived with Dumangon for a while in Tauranga. He says he was one of those people you describe as “always happy”.

He was always talking about fishing, Bauyon said, and always looking to find a new area to fish – “the best spot”. Then, after he went fishing, he would talk about what happened. He would also make videos about his various fishing adventures and post them on YouTube.

He was friendly, “easy go lucky”. He loved playing guitar in his room, singing, dancing. He kept people smiling, was a jokester. The life of the party.

Ello and Bauyon aren’t really into fishing themselves, but said they would still go along with Dumangon and have a good time. He would keep them interested and entertained.

“I am very happy to [have] met him because he’s a good friend, he’s a happy person. He will make you happy,” Bauyon says.

He has a message for his late friend.

“You will always be remembered as a good friend, as a happy person. We will never forget you.”

Dumangon’s plan, once the Covid-19 cloud lifted and the New Zealand border opened, was to bring his son over to join him, to study here.

His two daughters and son live in Manila.

Jesse Misa is a pastor at Living Grace Fellowship church in Tauranga, the congregation of which is largely Filipino.

Misa has been in contact with Dumangon’s brother back in the Philippines.

“Of course they are saddened about what happened, but they would really like to get him back.”

Misa says being far away is making it “harder for the family to grieve and mourn”.

“I think Covid has really accentuated a lot of the harshness of being away.”

He says the Philippines embassy in New Zealand is now involved and plans are being made to hopefully repatriate Dumangon.

“Apparently he supports a lot of people back home,” he says.

“Most Filipinos who have come here do that, that’s their motivation. They work hard, and some of them even work on Sundays.

“One of the things about Filipinos, we know how to take care of family.”

The Tauranga Filipino community is now banding together to help and plans are being made for a memorial service.

“Maybe one consolation is that what took him is the very thing he loved doing,” Misa says.

“At least he was out there doing what he wanted to do.”