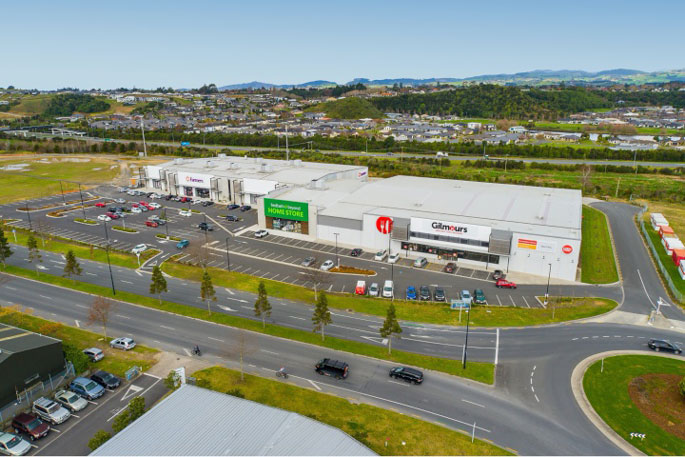 The site at The Crossing. Photo: Bayleys/Supplied.

A large-format retail complex with three tenants located in the Tauranga Crossing Lifestyle Centre has been sold for $44 million.

Marketed by Bayleys’ executive director David Bayley and national commercial and industrial director Ryan Johnson, in conjunction with Jo Stewart of Bayleys Tauranga office, the 11,600 sqm complex constructed in 2018 is occupied by Gilmours, a subsidiary of grocery retailer Foodstuffs, Farmers and Bed Bath & Beyond.

It is located on a 2.5 hectare site on Taurikura Drive, in the Tauranga suburb of Tauriko and is part of the largest and newest shopping centre in the Bay of Plenty.

“We initially just had the Gilmours property for sale but this spurred enquiry in the whole complex from institutional investors interested in bigger scale, large-format retail opportunities so the offering was scaled up to include the option to bid for the adjoining buildings housing the other two tenants as well.”

David Bayley says the property was purchased by a substantial national private investment trust. He says a significant attraction for investors was quality of the leases and the strength of the property’s location on a main thoroughfare connecting State Highway 36 and the massive Tauriko Business Estate, in one of Tauranga’s fastest growing suburbs.

Tauranga Crossing, which the Lifestyle Centre is part of, has more than 120 tenants, occupying over 45,000 sqm of lettable space, plus close to 1800 car parks.

Other tenants include Pak'nSave, The Warehouse, Noel Leeming, H&M, Event Cinemas as well as independent retailers and food and beverage businesses.

The regional shopping centre is being developed in stages and when completed is expected to have around 70,000 sqm of retail space.

Ryan Johnson says large-format retail has been a star performer in the New Zealand commercial property market over the last 12 months, providing a total return (income return plus capital gain) of 22.4 percent according to the MSCI Property Council of NZ March 2021 quarter figures.

“The recent unexpected rise in consumer spending on hardware goods, homewares and electronics – in addition to staple spending on grocery items - has increased the attraction of large-format retail property. However longer term, it has been a resilient and consistent performer providing an average total return of around 11 percent over the past 15 years according to the MSCI index which revalues a large portfolio of New Zealand commercial property on a quarterly basis.”

There is no shortage of commercial investment but huge shortage of housing. This is what happens when a government hates residential landlords.