An artist’s impression of the adaptation. Photo. Supplied.

Nga Poutiriao o Mauao is to begin works to restore Waipatukakahu puna or stream on Mauao and re-establish the historical site as its traditional cultural purpose such as weaving.

As part of the restoration project, representatives of Nga Poutiriao o Mauao/Mauao Joint Administration Board will remove a number of exotic trees next week from along Te Ara Tutanga or Base Track.

This includes four large oak large trees that currently grow on this very old puna site on the southern flank.

In line with the 2018 Mauao Historic Reserve Management Plan, exotic trees are to be progressively removed from Mauao given its status as a special ecological area.

As the oak trees are deciduous the leaf fall and seedling growth stops the flow of this important puna, which would naturally pool at the base.

Landowners say they wish to restore the Waipatukakahu water flow and have the site returned to its original cultural purpose as being a place for weaving.

Nga Poutiriao o Mauao chairman Dean Flavell states as representatives of the traditional owners and guardians of Mauao, the board cares deeply for the maunga and do not wish to further degrade the Waipatukakahu, which translates to mean ‘the stream where flax garments are made’.

“Currently this puna is blocked every year for many months,” he says.

“Removing these trees and the resulting leaf debris will produce an uninterrupted flow of water. By enabling the water to flow we are helping to restore the mauri (life force) of Waipatukakahu and of Mauao.” 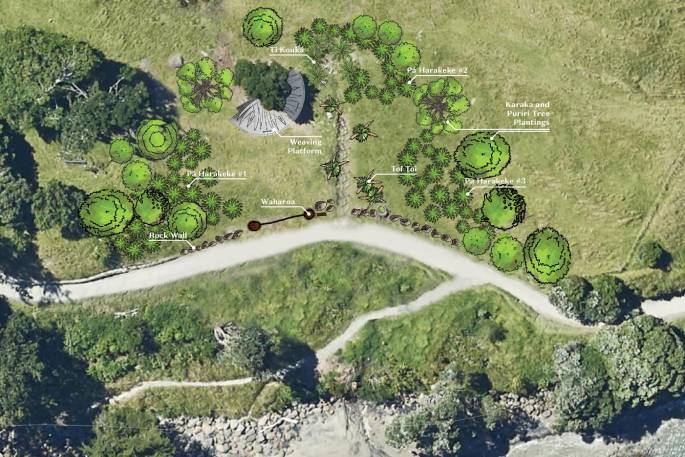 The area will then be replanted with three mass pa harakeke plantings made up of different types of harakeke unique to this area for weaving.

“Rather than being a place to look at, this area is to again become a place where people can come to weave and create the muka (prepared flax fibre),” Dean says.

“Our aspiration is for people to come to practice their weaving art form and allow tangata whenua to reconnect with this cultural site. It is to become a place of living history and we look forward to bringing old traditional uses and practices back to Mauao.

“As the oaks have grown for a long time on this important site, they will be taken off site to be carved and returned to the maunga as taonga.”

The other four exotic trees to be removed are Pine, Elm, Grevillia and Brachychiton. All of the trees are currently growing on archaeological features and will be removed by specialists.

Wardens will be in place to advise visitors of the closure.

The compass will feature touchstones at the centre, which carry mauri (lifeforce), to maintain the mauri of Mauao. Radiating from the touchstones, the compass design will identify significant sites on the maunga, outlying landmarks and islands, and select star and sun positions.

Representatives of Nga Poutiriao o Mauao (Mauao Joint Administration Board), worked together with Toitu Te Whenua Land Information New Zealand to remove the trig or beacon and associated surveying mark known as ‘1317 - A Maunganui’ with a view to reinstating the survey mark elsewhere on the summit.

Maybe I’m getting confused but I thought we lived what is deemed as modern times, why should someone want to go Mauo to do weaving of flax?

Well there’s a first Robin.... Will you be initiating a public protest against a proposed Maori development....? Not sure if this response will get past editorial sanctions on freedom of speech mind you.

Actually I quite like the sounds of this idea although I wish trees didn’t have to be removed, especially the mighty Oaks. It would be quite a sight to walk the track and stop to watch some traditional weaving.

Trees are the essence of life on planet earth. Perhaps Lgr should practice Bonsai growing to get an appreciation of the beauty and peace trees can bring.

Who is going to pay for this, is the owner paying or (TCC) US RATEPAYERS,IMMMMM my thoughts only on this,im out Sunlive 10-4 out. phew.

No, not okay at all.

Work WITH the trees that are there not rip them out and turn them into ’taonga’. What a sick joke. :(

I have never seen trees as anything other than a resource. They are the largest form of weeds and just because they are allowed to grow for years shouldn’t give them any more importance than a newly planted tree in an appropriate place at this point in time. There are many trees that were appropriate at the time of planting, that should now be removed to allow for advancement and the betterment of the community.