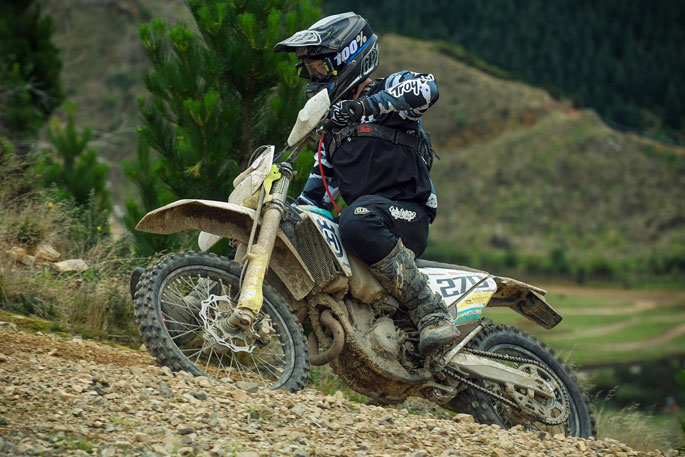 Cambridge's Dylan Yearbury (Husqvarna), on his way to cementing his position at the top of the standings at the weekend. Photo by Andy McGechan, BikesportNZ.com

Even after two brutal and unforgiving, back-to-back days of racing, there was just one second to separate the top two finishers at round three of the 2021 New Zealand Enduro Championships at the weekend.

The third round of five in the Yamaha-sponsored series was held in forestry in the Moonshine Valley, halfway between Porirua and Upper Hutt, over the Queen's Birthday Weekend, the tricky terrain certainly putting riders to the test and ensuring the margins between success and failure were ever so small.

It was a gruelling double-header event, with riders racing two consecutive days in the Akatarawa Forest, albeit with Sunday's racing in a few different sectors of the forest than had been raced on the previous day, and it was the cream of New Zealand's dirt bike racing talent that rose to the top.

Yearbury responded by going on the attack on Sunday, the Waikato man wiping out the time deficit and reasserting himself at the top of the standings.

Yearbury won day two by 14 seconds from Buxton and he therefore took the weekend's overall honours by a solitary second.

The 19-year-old Scott finished the weekend third overall, 53 seconds behind Buxton, the recently-crowned national motocross championships No.2 (in the 250cc class) showing great versatility to take a 450cc enduro bike and seamlessly transfer his skills from one bike code to the other.

Motorcycling New Zealand enduro commissioner Justin Stevenson says the course at Moonshine was certainly tough, but he was also pleased to report that there were no injuries all weekend.

"That's a credit to the host club. The course featured a few very steep down-hills, but the club did a wonderful job of marking it well to ensure the safety of riders."

It could be a winner-takes-all final two days of racing, at separate venues in the Wairarapa Region, next weekend. Round four is set for farmland near Masterton on Saturday, June 12, with the fifth and final round due to be fought near Martinborough the following day.