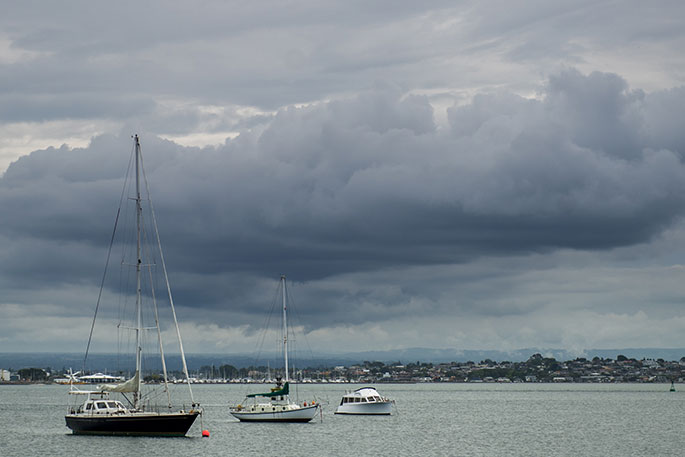 The rain has stop but clouds remain for tomorrow. File image/SunLive.

There was plenty of active weather over Queen’s Birthday long weekend for northern New Zealand, as a low pressure system north of the country brought cloudy, windy and rainy days.

MetService is forecasting further rain and wind for parts of the North Island before things become settled across the country for the remainder of this week.

The low delivered much-needed rain to the top of the North Island from Saturday, and some spots, such as Kaikohe in Northland, have already surpassed their June average rainfall within the first eight days of the month.

Auckland also got its share of the rain. MetService meteorologist Mmathapelo Makgabutlane says, “Although the accumulations were not as high as what was seen farther north due to an amount of sheltering by the Coromandel Peninsula in the easterly circulation, the contribution to the dams will still be welcome”.

The low also cranked up wind speeds in that region, where Strong Wind Warnings and Watches were and still are in effect in some areas.

"The weekend saw much of Northland get wind gusts over 80 km/h, while Cape Reinga measured maximum winds of 102 km/h on Sunday.” These strong winds continue for the rest of today, then start to ease through tomorrow," says Mmathapelo.

The focus turns to the eastern North Island from this afternoon, as a persistent onshore wind flow brings rain to the Gisborne region. A Heavy Rain Warning has been issued there until tomorrow morning.

Things remain settled over the South Island and most of the rest of the North Island for the coming days. “A ridge of high pressure keeps most of the wet weather at bay, but a front that whizzes past the lower South Island on Thursday brings brief light rain to the area,” she says.

Those in the Mackenzie Basin and parts of Central Otago can expect to wake up to foggy mornings, and though blue skies may break through for some, the settled air under the ridge may prevent a clearance of the cloud and fog for those near lakes and valley areas.