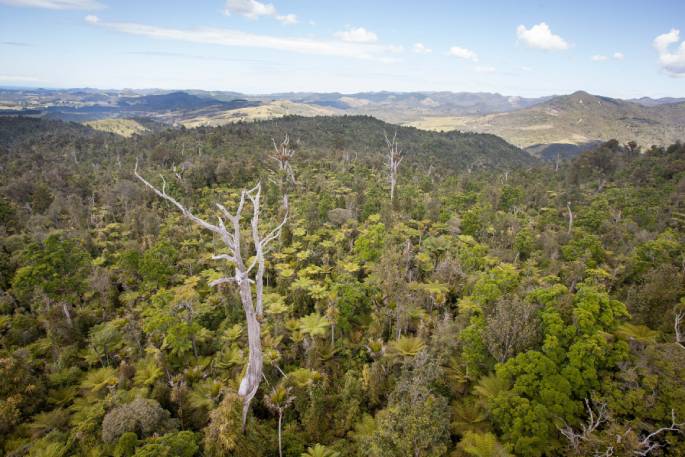 Drone footage has highlighted the impact of possum on native trees. Photo. DOC.

Newly released drone photography shows the impact of possums on a section of ancient forest in northern Coromandel, and also the value of predator control and restoring forest habitat.

The images were obtained as part of work undertaken by staff from the Department of Conservation’s Coromandel district.

This work involved seed collection tasks in summer as part of efforts to stop the spread of the tree disease myrtle rust and safeguard genetic seed stock for the species.

Myrtle rust has the potential to weaken and eventually kill some native New Zealand tree species such as pohutukawa, manuka and rata.

Nick Kelly, DOC’s Coromandel operations manager, says the drone images show the stark contrast between an area where there has been more than 25 years of predator control effort, and an adjacent section of land where predator control has only been undertaken twice in the last decade.

“The tops of the rata trees in the two images are where the difference is really evident,” he says

“In the area where we’ve had long-term predator control, you can see the distinctive red-brown colour of the rata trees flowering. They’re good healthy trees, with plenty of leaf coverage and no signs of the damage possums cause. 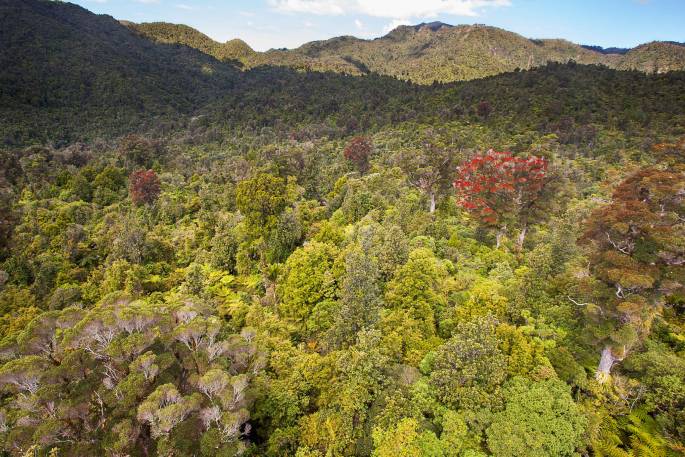 Healthier trees where predator control is in place. DOC.

“But in the other image, several dead rata are clearly visible. Over time, they’ve been stripped of leaves by possums and that’s led to the trees dying.

“Those dead specimens really stick out, and they’re a trigger for what we term a ‘top-down collapse’ of the forest eco-system.”

As larger trees die off due to the impact of possums, it compromises wider biodiversity and forest health, with birdlife, insects and other native wildlife affected.

“You can wander through the forest and not necessarily see the impact of these introduced pests. What the drone imagery shows us is what people do not see when they’re out for a walk or a tramp.”

The Coromandel forest being protected is home to important native species such as Archey’s frogs, Coromandel striped gecko and Coromandel brown kiwi.

It’s also believed the area has woodrose/pua o te reinga, an extremely rare and threatened parasitic, fungi-like plant which is pollinated by long-tailed bats/pekapeka but destroyed by rats and possums.

Residents can also help by contributing to local conservation and environment groups involved in community-driven predator control and replanting exercises, as well as following advice about invasive tree diseases such as myrtle rust and kauri dieback.

DOC is currently consulting with iwi, landowners and stakeholders for a Tiakina Ngā Manu predator control operation recommended for later this year.