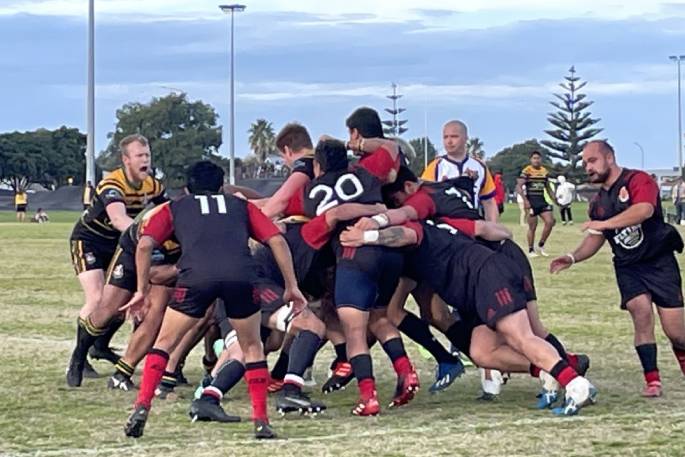 Following the Queen’s Birthday results the first five clubs have been sorted for round two of the Farmlands Baywide Premier Mens 1 competition due to kick off on Saturday, June 26 2021.

Te Puna, Tauranga Sports, Te Puke Sports, Greerton Marist and Rangiuru are definitely through to the top eight for round two but the race to join them is heating up.

Whakarewarewa and Mount Maunganui Sports sit in joint sixth but with two weeks left in round 1, both have some interesting match ups to secure at least one more win to guarantee a place in the top eight.

Whakarewarewa travel across town to tackle 8th place Ngongotaha at Ngongotaha Domain, who will be desperate for the win before rounding out the first round with what could be a crucial match when they host Mount Maunganui Sports at Puerenga Park.

The Marlins on the other hand have a tough road home. They host cross-town rivals Tauranga Sports next week before heading to Puerenga Park to take on Whakarewarewa.

At the bottom of the table, Arataki look destined to head down to Premier Mens 2 having failed to secure a win so far and with a bye last round have no way of securing any more than 4 competition points.  Their bottom of the table clash next week with fellow cellar dwellers Rangataua at Ariki Park, Maungatapu will be for pride and form heading into round two.

In Farmlands Baywide Division One grade, the top five clubs looking to head up to join Arataki, Rangataua and either Marist St Michaels or Ngongotaha in the Premier Mens 2 round are Opotiki Sports, Rotoiti Sports, Kahukura, Judea and Waikite.  On paper, Te Teko have a mathematical chance as well, however, the best they could do is finish on equal 20 points with Waikite.

However, Waikite’s comprehensive win over Te Teko way back in round 1, 36-8 means Waikite would go up on the “who beat who” rule.

“Our Colts team has grown in both numbers and culture since the BOPRU announced the colts competition way back in December 2020,” says Greerton Marist President Russell Smart.

“It’s been fantastic for our club to get our Colts team off the ground.  We’ve been able to blood new players in our development team during the first round."