BOP nurse fears for profession ahead of strike 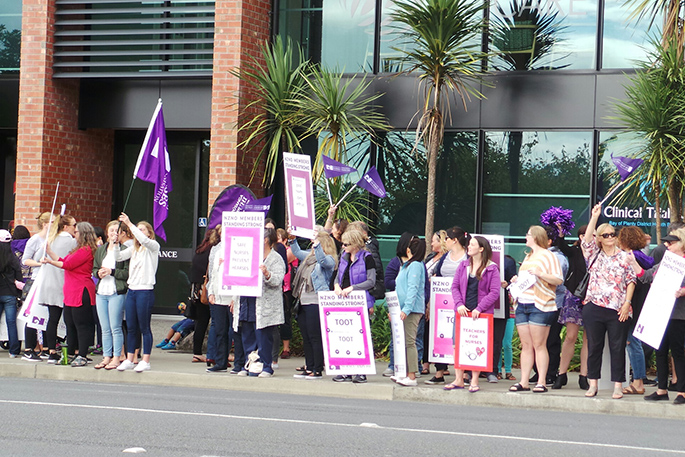 Bay of Plenty nurses plan on striking tomorrow along with the rest of the country. File image/SunLive.

An experienced Bay of Plenty nurse says she fears for the future of the profession, as thousands of colleagues prepare to go on strike tomorrow.

Negotiations between the union, the New Zealand Nurses Organisation, and district health boards have stalled after nurses rejected the latest offer yesterday.

The DHBs say they were disappointed with the outcome of the ballot, but were assuring the public essential services would still be available on the day.

The discussions have been taking place for a number of months, and industrial action was initially settled on in mid-May.

That led to a revised offer from the DHBs, which offered a down payment of $4000 to all staff, ahead of their pay equity claim to be settled later on this year.

"We had thought that the improved offer that we gave, and the additional money around pay equity would enable a settlement to be reached, but that's proven to be not the case," says the DHBs’ spokesperson, Jim Green.

The union says the pay equity claim was just a lump sum, and would not address the longer term problems within the sector.

"They're tired, they're exhausted"

Cheryl Hammond, a nurse of 43 years, works in the Bay of Plenty. But she says she fears for the future of her profession.

"I want to make sure that anybody that comes is going to do their 43 years in nursing.

"They're tired, they're exhausted."

She says over the past six years in her job, her workload had doubled, as more demand was put on their services.

But over the same period, she says they had not recruited additional staff and pay has never been adequate.

"I worry about the new grads.

She will be involved in tomorrow's strike.

"It's one thing I really do not want to do, but if it's the only way we're going to get an improvement, it's the only thing we can do."

DHBs urged to go back to drawing board

The union says the new offer from the district health boards was substantially the same as it was previously.

One union member - a senior nurse at Canterbury DHB who wanted to remain anonymous - says the DHBs need to re-evaluate.

"They need to find the funds to come up with a fair and decent offer. The government and DHBs need to work together for that.

"Only then can we start actually retaining staff, and attracting staff."

She says the poor pay and poor working conditions are having an impact.

"We're losing so many nurses, not just to Australia, but we're losing them elsewhere.

The strike will go from 11am until 7pm tomorrow.

A number of picket lines and marches are scheduled for the day, across the country.

Jim Green says the DHBs are all set up for the strike, and life-preserving services would stay running.

"At the same time, as DHBs, we plan by reducing the load on hospitals over this time, and where there are services we can delay or postpone, we can do that.

"That's mainly around people that need planned services or elective services as well call them."

He says anyone with an elective appointment should know by now whether it has been postponed, but if not, they should check with their DHB.

If people do need urgent care, they are being assured they will still be able to attend hospital, or dial 111. If you do not know whether it is urgent, you are being asked to call Healthline or your GP.

Both sides have agreed to meet after the strike, to continue the negotiations.

At a time when the government has faced unprecedented costs related to COVID19, the nurses are now demanding more more more, they went on strike 2 years ago demanding more remember that! Everyone goes into a profession knowing what the pay and conditions are like. Nurses want junior nurses to get paid more than others who start off at the bottom and work up. Be honest and tell the general public what is in your current meca, ie automatic pay increases yearly until you are on over 80 thou per year plus allowances. the Nurses also chose their strike date so as to disrupt the holiday plans for every other DHB employee as there is no leave available during the strike. Sorry but the nurses are now coming across as greedy with no thought about the country and the economic challenges ahead. the pot is empty but they want mor