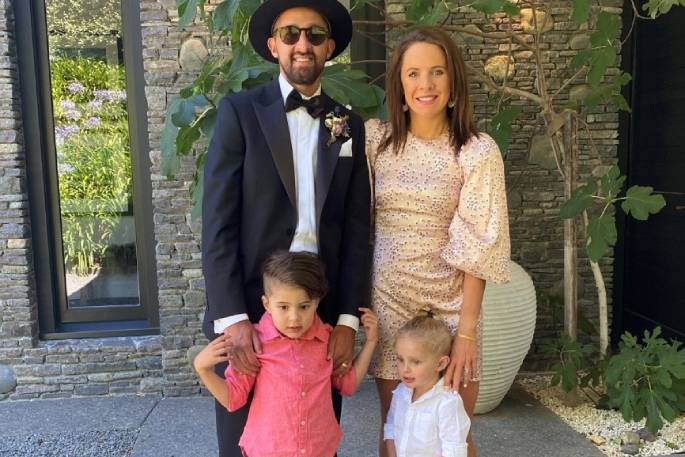 Maree with husband Kunaal and boys (left to right), Rishi (4) Sachin (2 at the time) earlier this year before heading to a friend’s wedding in Hawke’s Bay. Supplied photo.

Tauranga runner and mother of two, Maree Rajpal is thanking the team of first responders who saved her life when she went into sudden cardiac arrest during the Hawke’s Bay half marathon.

The 32-year-old was competing on Saturday, May 14, along with 8000 others, when she collapsed without warning.

Fortunately, a number of medical professionals, including a cardiologist and an orthopaedic surgeon, were running close by and immediately started cardio pulmonary resuscitation.

“I was feeling great at the start of the race,” says Maree.

“My body was ready to go, I was hitting targets in my training and everything appeared to be on track. I felt the same, if not better than I have felt before other events.”

An avid runner, Maree has competed in events since she was 14 across a wide range of distances, from 5 kilometres to the Tarawera ultra marathon along with her husband Kunaal.

“The last thing I remember was feeling light-headed,” says Maree.

“I pulled over to the side, paused my watch and then the world went black.”

Maree is one of more than 2000 people in New Zealand who is treated for sudden cardiac arrest each year in the community.

“My experience shows the importance of good first aid skills. Without it, I wouldn’t be here today and I can say this for a fact.”

“All up I think there were eight people who gave CPR and saved my life.

“They gave me the best possible first aid, which is shown in my cognitive functioning and the fact I have no loss of memory or abilities. Then the defibrillator from the fire engine was used to shock my heart and bring it back to a normal rhythm.”

Maree was taken to the emergency department at Hawke’s Bay Hospital and then spent two days in the hospital before being transferred to Tauranga.

“I have so many people to thank.

“As well as the first responders, I feel so grateful to the emergency workers, the ambulance and fire engine drivers who cared for me and transferred me to hospital - particularly the one who drove my kids to the hospital with our puppy on her lap so that my husband could stay with me.

“The nurses and doctors at Hawke’s Bay Hospital were amazing, and the flight team who brought me back to Tauranga.

“The incredible nurses and cardiologist up here have also given me outstanding treatment, and the entire running community has wrapped around me, checking in on me as I recover.”

If you witness a cardiac arrest, you can increase the person’s chances of survival by calling 111 immediately, doing CPR and using an automated external defibrillator.

They also have a free CPR app on offer.