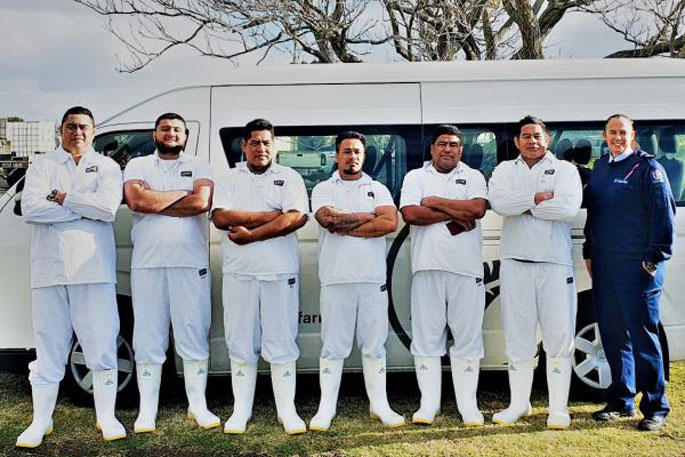 A group of Samoan seasonal workers are now the proud holders of full New Zealand driver licences - thanks to the efforts of a determined Hastings police officer.

The men arrived in Hawke’s Bay from Samoa in October 2019 to work at the Silver Fern Farms’ ‘Pacific’ Hawke’s Bay beef processing site.

Under New Zealand law they could drive on their Samoan licences for 12 months, which was usually fine as they would return home every year. But then Covid hit and they did not return home.

The Government temporarily changed the rules in December 2020 extending the period for driving on an overseas licence to a maximum of 24 months after arrival.

This meant the workers could drive until October this year, but it didn’t solve the problem long term, especially if they stay on in New Zealand.

Chris, who worked at Silver Fern Farms before joining police, knew many of the men through the rugby team she managed and together, her and Jilly hatched a plan to help the workers gain a full New Zealand licence.

While Jilly arranged for the workers to be available when Chris needed them for lessons, Chris started by preparing them for the theory test, which was made more challenging given the language barriers.

Next came the driving lessons to prepare them for their full practical licence test. Chris does all this work in her own time.

Six months on and six workers now have their full New Zealand licences, allowing them to drive vanloads of workers to and from work each day.

Jilly says Silver Fern Farms provides four houses and four vans for the 35 Samoan workers they employ, and the goal is to have two fully licenced drivers per house.

“Chris has done an absolutely amazing job helping these workers get their full licences. It is a true example of two great-minded women getting their heads together and finding a solution."

Jilly says it’s not the first time Chris has helped workers at the plant.

“A few years ago, she initiated theory classes for staff at the plant to assist them prior to sitting their learner licence. She does wonderous things for us.”

Chris says her motivation comes from her passion for driver licencing.

"It means they can more easily become a contributing member of society. Because we don’t have a lot of public transport in Hastings people need cars to get to work, so without a licence that’s tough."

This is just one example of the work Chris does in the driver licencing space. In 2009, she created resource to help secondary school students prepare for sitting their learner’s theory test.

‘It’s a big ask to get teenagers to sit down and memorise the road code. This resource reflects all the questions they will be asked in the learner theory test and teaches them in a more user-friendly way.”

The resource is now available in schools across Hawke’s Bay and has been shared to other police districts.