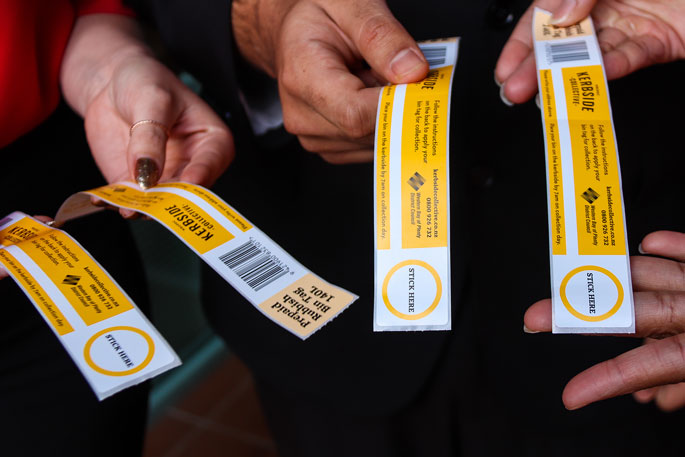 Western Bay of Plenty District Council is introducing pre-paid rubbish bin tags in what it says is a financial incentive for Western Bay residents to reduce their waste.

One month out from Western Bay of Plenty District Council’s new kerbside rubbish and recycling service, the pay-as-you-throw rubbish tags are available at the following stockists across the District.

The recommended retail price is $3.95 for each tag.

The fluorescent orange pre-paid tags are for the red lid rubbish bin component of the new service. The tags and Council’s bins are not to be used before July 1.

Council Deputy CEO and Group Manager Infrastructure Services, Gary Allis, says Council has attempted to provide an even spread of stockists across the District with more locations to be added ahead of July 1.

To use the tags from July 1 follow these steps:

-Purchase a tag from one of the selected stockists

-Place the red lid rubbish bin on the kerb by 7am alongside other bins ready for collection on your collection day.

Gary says on average each household District-wide produces about 640kg of waste per year and these pre-paid tags are an initiative to help reduce the amount of rubbish sent to landfill.

“By implementing a pre-paid system for red lid rubbish bins, each household is only paying for the rubbish they generate and is not bound by a fixed rate – providing a financial incentive for people to reduce their waste.”

Serviced households’ recycling, food waste and glass bins will be collected on a regular basis, but the frequency of the red lid rubbish bin being collected is up to the resident. Only when a pre-paid pay-as-you-throw tag is attached to the bin will it be collected.

The rubbish collection component of the new service is charged through the pay-as-you-throw tags – a pick up cost only charged when people choose to put their red lid rubbish bin out.

This cost is not included in the annual targeted rate being added to eligible households’ rates invoices – $149 for a full service and $98 for a partial service – which covers the recycling component of the service (recycling, glass and food scraps).

“The costs of disposing waste to landfill will continue to increase. To reduce this we all need to think about sending waste from landfill to be recycled or composted,” says Gary.

“Moving from plastic bags to a pay-as-you-throw system is also a better environmental choice for our District.”

The tags only apply to those in the Western Bay of Plenty catchment. Tauranga residents don't need these tags, as everything will be included in their new targeted rates.

For more information on pay-as-you-throw tags and the new kerbside rubbish and recycling service visit kerbsidecollective.co.nz

Where the tags can be purchased:

What happens now with the various rubbish collections etc for people that have health problems or are living in Elderly Council Villages or related villages that are in Gated Communities. Also how are these elderly people going to cope with trying to haul their rubbish etc out to the roadside in time for the pick-ups. The Elderly are unable to do this on their own in some areas because of the steepness of trying to haul it all up to the proposed pickup areas and many of the elderly have no-one else to help them at their age.

Thanks for the clarification. I missed that important difference. So, as a TCC user, I won’t be paying extra for normal rubbish? I agree with you that the WBOP scheme IS fairer, provided they are’nt already charging for collection in the rates. I stand by the fact that people will nick the stickers and that may render it unworkable, though.

Why not just put the money out by the bag like we use to with milk bottles. I’m sure cash would be more effective . . .

Beefhooked has a very valid point.

People WILL nick stickers off other bins. It is a totally flawed system.

Thanks Tom Ranger, when the red lid is modified the yellow lid requires a number 5 sticker placed on it.

@morepork. Unfortunately...Nefariousness is rife in politics. I’ll predict...in the not too distant future. Tauranga residents will be faced with the same absolute ran shackling.

@user pays. Geez. You are too good for them. They must have been offended by your really good suggestion.

almost got it right

Red lid bins should have a barcode or microchip, it could be scanned when tipped into the new trucks and the charge added to the water bill of the same address, the TCC did not respond to my suggestion.

I can see these tags being pinched for themselves from bins placed on the kerb for collection. Then what? Obviously the bin won’t be emptied and the household will have a bin full to dispose of...........somewhere???

This is simply outrageous!

They pushed these bins onto us saying the cost of collection would be paid for in our rates. Now it turns out that we will, in fact be paying for our "normal" rubbish collection. I am perfectly happy with J. J. Richards and the cost (if I put out a red Council bin with the same frequency that I do currently, is pretty much the same (but I don’t have to go and buy tags...). So why is it not an option for people to NOT have Council red bins and remain with their current suppliers? Why am I not allowed to support a Kiwi Company instead of an overseas one? Why was there no referendum on the whole question of new garbage disposal? Another example of Democracy being undermined by people in power. It is disgusting.

It seems ironic to me that we are being told to lower our wastage & then having a single us "voucher" system thrust upon us. I assume all parts of the stickers are recyclable or compostable?

A much better fairer system than TCC draconian system. Western bay obviously thought it through .