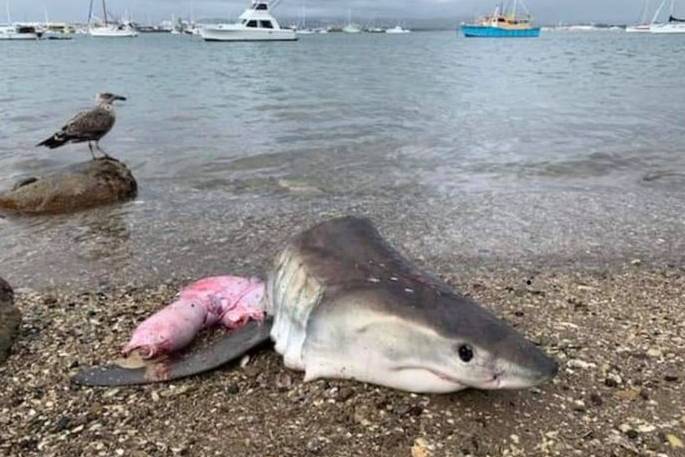 The meat and liver of a great white shark have been seized by the Department of Conservation following a search warrant at a residential address in Tauranga.

A man who lives at the address is now assisting DOC investigators with their enquiries.

The warrant was executed by DOC investigators following the discovery of the shark’s head at a beach at the base of Mount Maunganui in May.

The head and remaining dismembered carcass of a juvenile white pointer has been discovered at Pilot Bay.

“Every year about 12 dead or dying great white sharks show up on New Zealand shores, but the Tauranga shark is the first one for a while that appears to have been taken for food,” says Clinton Duffy, Department of Conservation marine technical advisor at the time of the May discovery.

“The Department of Conservation is saddened by this act which is being investigated and anyone with information is urged to get in touch.”

Great white sharks are protected under the Wildlife Act 1953.

Anyone found killing or possessing them can face up to two years in prison, or a fine of up to $250,000.

“Fishers are expected to not only know Fisheries regulations for the area they are in, but also to be able to identify the species they catch and whether or not they can be legally taken,” he says.

“We would like to thank members of the public who reported this and shared information with us.”

With the investigation continuing, DOC will not be offering any further public comment on the case.

To report any suspected illegal activity members of the public should ring the DOC emergency hotline 0800 DOC HOT (0800 362 468).

...that people who are tempted by this realize there will be serious repercussions.