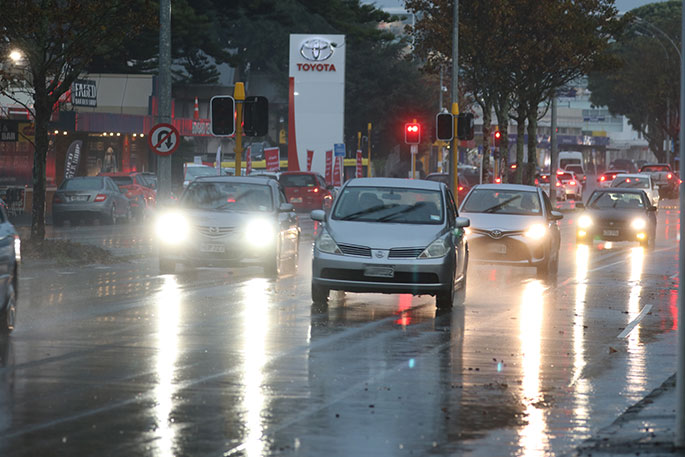 Heavy rain is being forecast for Saturday. File photo/SunLive.

Bay of Plenty residents are being urged to prepare for heavy rain this weekend.

The current settled weather over the country is expected to give way to a complex low and its associated fronts.

The MetService says this will slowly move across the country on Friday and through the weekend.

MetService is forecasting strong winds and heavy rain for many, with eastern regions of the South Island lined up for particularly significant rain.

Brief rain is expected for many regions on Friday as a front moves across the country, with road snowfall warnings in place for Lindis Pass and The Crown Range road.

The possibility of snow highlights that it will be another frosty start for those in the south. However, as the low approaches it brings slightly warmer temperatures and more cloud cover by the weekend.

The incoming low makes its presence known on Saturday.

Over the North Island, periods of rain develop, with heavy falls and possible squally thunderstorms for Taranaki to Waikato and Bay of Plenty northwards.

Further south, southern Westland and Fiordland are the only places expected to remain dry. Heavy rain is expected to set in for northwest Nelson, and from Marlborough down to Otago.

As the low envelops the country on Sunday, the rain eases to showers over the North Island. However, a strong onshore flow in the east of the South Island continues to drive persistent and heavy rain into the area, falling as snow about the Alps.

“There is still some uncertainty regarding exactly where the heaviest falls will be, but nonetheless this will likely be a significant event for some,” says Rossiter.

Currently, areas of the eastern South Island are significantly drier than normal, especially in Canterbury.

While this rain may bring relief to the dry soils, these large accumulations could see flooding and rapidly rising rivers.

A heavy rain watch has been issued, and it is likely to be upgraded to a severe weather warning in the next day. 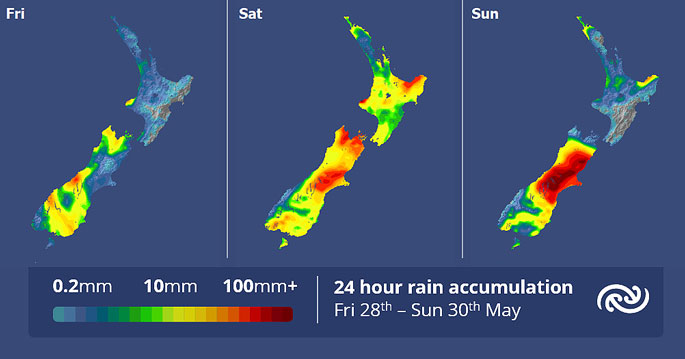 The above maps show the anticipated rainfall accumulation for the country over the weekend. Image: MetService.