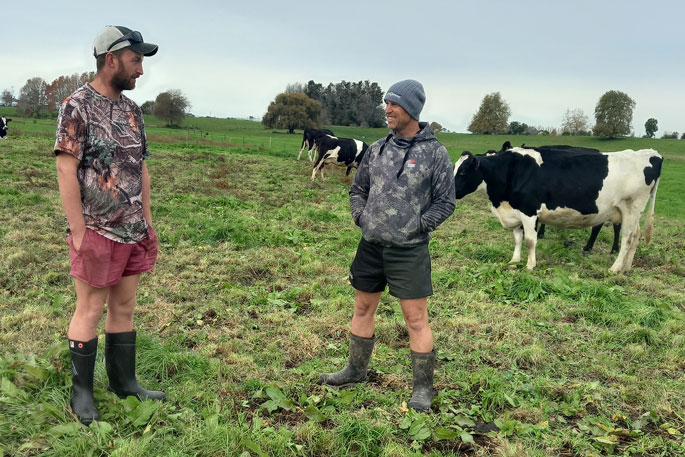 A Te Puke farmer who lost one of his fingers in a farming accident is encouraging farmers to be proactive about their wellbeing.

Paul Walker says he lost his finger due to stress and fatigue and says farmers need to look after themselves.

The Pongakawa dairy farmer, who has been on the job since 2005 when he came home to his family farm, lost the ring finger on his right hand in October 2008 in a horrific incident when he tried to fix a fan belt-driven water pump.

They had lost water to the dwellings on his farm and he turned the machine off and tried to work out what the problem was.

“I thought I’d fixed it, so I turned the machine back on and headed home and then I heard something. Instead of turning the machine off again, I didn’t,” he says.

“I put my hand where it shouldn’t have gone and off my finger went through the fan belt pully.”

Walker negotiated around 100m from the water pump to the house and then straight to the hospital and into surgery.

“The body is an amazing machine and I did what I had to do. My finger was hanging off and the shock set in. It took about 40 minutes for it to hurt and then it was pretty painful.”

Walker is not alone.

Agriculture is New Zealand’s biggest export earner but it’s also one of our most high-risk industries.

In 2020, there were 22,796 farm-related injury claims accepted which came at a cost of $84 million to help people recover.

That's more than 60 farmers getting injured every day. That’s a big impact on them, their families and the rural community when they get taken out of play.

In the past five years in the Bay of Plenty, there have been 7846 farming related injuries accepted by ACC, with 1635 injuries in 2020.

This was the highest number of claims for a year in this period.

Farmstrong is a rural wellbeing initiative for farmers and growers to help them ‘live well to farm well’.

In 2016, ACC became a strategic partner of Farmstrong, joining FMG and the Mental Health Foundation and in 2020 increased their investment to $3.5 million over the next five years.

Walker says his injury was preventable.

“If I had been thinking clearly it would not have happened. When I explain to someone now what I did, I just can’t believe that I did that, but it was the result of stress and pushing myself too hard. Through overload of work you just don’t think properly.”

An ACC-funded study for Farmstrong shows 58 percent of recently injured farmers linked their accident to stress associated with farm work. A quarter of them said it was a major factor.

Exhaustion, lack of sleep, the stresses of farming, being isolated from friends and family, and being unable to take a break all add to the risks that a farmer or farm worker will have suffer an injury, the research shows.

“Every time someone gives me coins and they drop to the floor it is a good reminder of a time where I shouldn’t have been under so much pressure,” he says with a laugh.

Walker says with Farmstrong he has learned that your wellbeing has to be a priority.

“That includes removing yourself from the coalface and doing things that empty your stress water bottle. You need to give yourself that breathing space so your water isn’t pouring out the top of the bottle.”

Walker is coming into his 17th season on the farm and says that despite the challenges and the workload there is nowhere else he’d rather be.

“I love being out in the elements whether that is good or bad weather. When it is a nice day there is no better office that being on the farm. Most farmers just love their animals as well and I am no different. I get a lot of pride out of having happy and healthy animals. They return the favour by producing an income and supplying food for the world. It’s a rewarding role.”

He encouraged all farmers to be proactive in a prioritising their wellbeing.

“When you are pushing yourself on that farm and you take it too far it has a huge impact on your own output and also increases the chances of getting injured. When you are self employed without staff you have no one to fall back on apart from yourself.” And there is no one responsible to check on the hours you have worked.

ACC Head of Workplace Safety Virginia Burton-Konia says ACC is challenging all New Zealanders to “Have a Hmmm”.

Understand what stress looks like. Stress can look very different for many different people. Everyone reacts uniquely when their stress bottle overflows. If people and those close to them can understand those red flags of what not coping looks like then they can deal with that situation.

Prevention is key. It is important to not get yourself in that situation. Prevention is always easier than cure. Make sure you have the tools to deal with it. Farmstrong is really good at supplying farmers with tools to enjoy your work and have that work- life balance.  You can get so focused on your work that it’s easy to forget about looking after the farms most important assets yourself and your staff.

Get off the farm and talk. It is one of the main tools. Get into your community. You can get so tied up on being on the farm that you don’t realise that people are in the same situation. All it takes is getting out to the local sports club or a discussion group and you talk to others who are going through the same stuff. You realise that you are not alone and that can release a lot of pressure. Unpack the backpack by talking to people and then you are not carrying it around on your shoulders.

Farm-related injuries – BY THE NUMBERS

In 2020, there were 22,796 farm-related injury claims accepted which came at a cost of $84 million to help people recover.

In all ACC has spent more than $383 million on farm related injuries in the past five years, with the cost in 2020 the highest from this period.