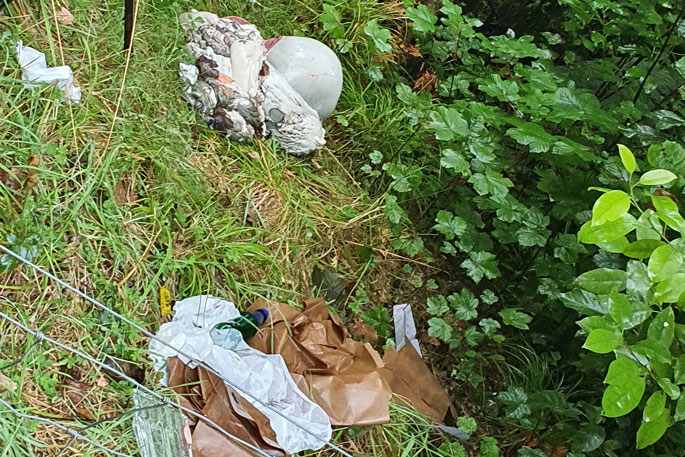 Rubbish in the reserve. Photo: DOC.

Visitors to Te Kuiti’s Mangaokewa Reserve are being urged to report fly tipping, vandalism and suspicious behaviour as damage and dumping continue at a site sacred to local hapū.

The reserve is managed by the Department of Conservation (DOC) and DOC’s Maniapoto District Operations Manager Graham Kimber says the persistent dumping and vandalism is increasingly frustrating.

“Mangaokewa Reserve is a sacred site for Ngāti Rora hapū, with the caves historically used as the final resting place for tīpuna,” Graham Kimber says.

“Ngāti Rora representatives have come to us with their concerns about how Mangaokewa Reserve is being treated by a small minority of people visiting – and those are concerns we share as responsible managers of this site.

“The fly-tipping and vandalism has been occurring for years and it’s deeply disrespectful. In recent weeks we’ve encountered household rubbish, trashed fences and even a severed sheep’s head.”

Graham Kimber says the ongoing dumping and vandalism takes his staff away from core conservation work, presents a health and safety risk to both DOC workers and visitors, and detracts from the natural beauty of the location which is popular with trampers.

“Cleaning up the rubbish and repairing busted assets ultimately costs taxpayers’ money – and it’s funding we would much rather put to conservation of species, improving visitor experiences and working with our community to protect natural areas.”

Staff from Tourism Holdings Limited, employed through the Jobs for Nature initiative, have been involved in some of the clean-up work.

Graham Kimber urges members of the public who witness vandalism or rubbish dumping at the reserve to report what they see to NZ Police or via the 0800 DOC HOT phone line.

Details such as car registrations, descriptions of individuals and photographs are valuable evidence police can use, he says.

“We need the public’s help here. Information and public pressure are really useful tools in curbing this sort of behaviour.”

Dumping rubbish on public conservation land is illegal. Under the Conservation Act, an individual can face up to two years’ imprisonment or a fine up to $100,000 for contaminants, while a corporate can face up to a $200,000 fine.

Since the passing of the Conservation (Infringement Systems) Act 2018, DOC can issue infringement notices for minor instances of littering. Penalties for littering on public conservation land incur a $300 Infringement fine.

“So ultimately there’s absolutely no excuse for tipping trash into a beautiful and sacred location like this."