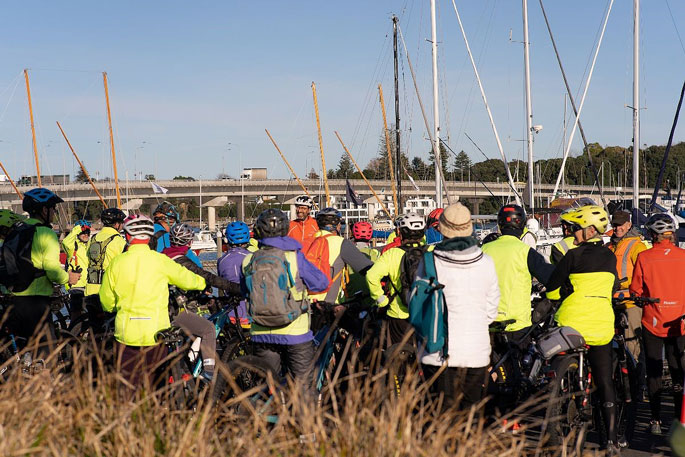 Awareness, positioning, control and good decision making were the main takeaways for attendees after the Blindzone demonstrations at Tauranga Marina Bridge carpark.

The free event on Tuesday by Share the Road and Travel Safe are part of an ongoing education initiative for Tauranga road users.

Trucks have several blind spots (also known as blind zones) that prevent a driver’s view of cyclists, motorcycles, cars and even larger vehicles.

The demonstrations allowed anyone an opportunity to sit in the driver's seat of a big truck to learn just where you can and can't be seen.

In previous demonstrations the local fire brigade showed up and attendees were shocked to find that not just a bike, but an entire fire engine could hide in a truck’s blind zone!

A steady stream of about 80 participants filtered through over the course of the morning demonstrations, all patiently awaiting their turn to see the road from a truck’s eye view.

Tauranga City Council acting director transport Russell Troup acknowledges the importance of ongoing education for all road users and was encouraged to see such a large turnout.

“It’s great to see so many Tauranga road users of all ages show up today to learn more about safely sharing the road. Initiatives like this are a fantastic way to better understand each other’s experiences,” says Troup.

This sentiment was echoed by Share the Road campaign manager Richard Barter who hopes the knowledge gained can be practically applied in the future.

“We really hope this experience has improved people’s understanding of blind zones and given them some ideas about how to change their behaviour when riding a bike or driving near heavy vehicles,” says Barter.

In addition to the Blindzone demonstrations, the Share the Road team will be holding six Share the Road Toolbox workshops with local truck companies and bus operators in late May and early June.

Using a simulated full-size road environment, drivers learn what safe passing and following feels like from a cyclist’s perspective.

A heavily laden logging truck and trailer hit our car on the Tga to Mount expressway. The truck driver said he didn’t see us when he changed lanes and came across straight into our car which was written off. We luckily escaped without injury.

As a motorist and some-time cyclist, I totally agree with your first paragraph. To suggest, however, that people cycle for purely altruistic reasons is stretching it a bit - it’s more likely that they’re motivated by health, cost and convenience concerns I should think.

I have no doubt that what you have raised happens. However it’s a bit disappointing that you opt to focus on the 1%, while the other 99% of cyclists follow the rules, but still suffer from abuse, intimidation and physical harm. And lets not forget the number that have died. I find it so crazy that people going out of their way to reduce traffic and make a positive impact on climate change get attacked, rather than supported. Makes you wonder what’s going on in some peoples lives, that they have so much negativity to spread around others.

Good stuff. Couldn’t agree more. Cyclists are a pain in the backside, especially on footpaths. But then again other pedestrians barge through without breaking rank, expecting others to jump out of the way. They have the same entitled attitude as truckies. And don’t get me started on Ute drivers. In fact, come to think on it, lack of consideration is just a Kiwi thing eh?

And how much attention is being paid by cyclists that run into parked vehicles ahead of them, or those that get run down going through a red light..? You never hear the real stories from those cyclists who admit that they were totally wrong in their actions. It’s time for cyclists to act responsibly on the roads and wait in line rather than under-taking stationary traffic and complaining about not being seen.

The thing about “blind zones” is that the driver, you know, the person who is supposed to be in charge, can adjust their body and head in order to see everything. If only truck drivers could learn awareness, positioning, control and good decision making there may be fewer single vehicle truck “crashes”.