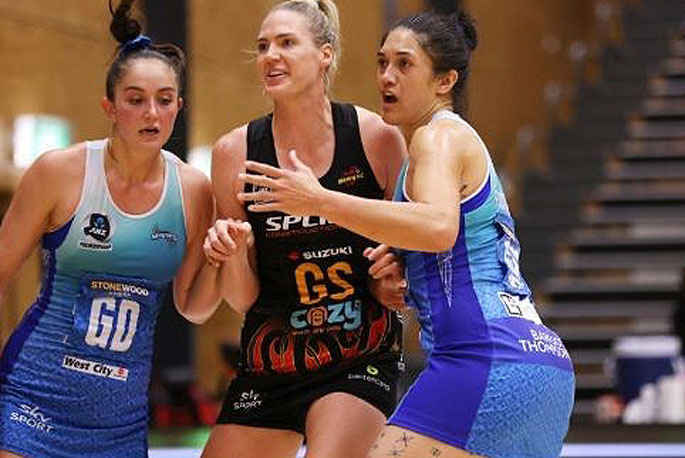 The Northern Mystics have closed the gap at the top of the table after grinding out a hard-fought 67-59 win over the Splice Construction Magic in Tauranga on Monday.

The Magic got the strong start that’s been missing in recent weeks, bolting out of the blocks to take a healthy lead after the first quarter but were slowly reeled in by the Mystics as the game progressed.

The Mystics have now moved to within one-point of the Robinhood Stars at the top of the table but showed their depth of talent to patiently build into the game before hitting the lead for the first time early in the final quarter.

From there, they showed no mercy as they shut down Magic’s gallant attempt to nail their second win of the season while also denying them a bonus point.

Magic were very good for long patches of the game but couldn’t halt a rampant-running Mystics in the run home.

Experienced wing attack Grace Kara returned to the Magic starting line-up after spending three weeks on the side-line with a calf injury while the Mystics retained their familiar starting seven of recent weeks.

And it was the presence of the veteran campaigner who got the Magic away to a flyer with the leadership and poise of Kara being instrumental in getting the home side on the front foot from the outset.

A steady stream of pinpoint quick feeds into Magic shooters Caitlin Bassett and the teenaged Khiarna Williams, who were equally accurate under the hoop helped the home side slot the first three goals of the match, leaving the Mystics playing catch-up for the rest of the stanza.

The Mystics attacking link of shooter Grace Nweke and Peta Toeava worked its way into the game but with the prolific Nweke well contained by the double defensive marking of Erena Mikaere and Temalisi Fakahokotau, it was the home side who flew into the first break with a handy 19-13 lead.

Both attacking ends needed plenty of patience on the resumption as the defensive intensity lifted a notch or two.

With more ball finding its way into Nweke’s hands, a five-goal unanswered streak helped the Mystics chip into the deficit.

With the Mystics quick-scoring ability a constant threat, the home side did well to absorb the pressure as Bassett and Nweke dominated proceedings under the respective hoops.

Magic play-maker Chiara Semple was introduced for the final five minutes of the half as the home side held the Mystics at arms-length when holding on to a 34-30 halftime lead.

The impressive Williams returned for the home side for the second half while Georgia Tong provided defensive relief for Fakahokotau and Mikaere for spells during the third stanza but it was the Mystics who made the early inroads.

With midcourters Tayla Earle and Fa’amu Ioane adding solid defensive resistance, the Magic stumbled on occasions to turn the ball over, the Mystics pouncing as they levelled the scores up midway through the stanza.

A composed and accurate Filda Vui took over from Bailey Mes in the Mystics circle without missing a beat as the visitors threatened to slip into overdrive.

However, it was the Magic who surged back in the shooting stakes despite the best intentions of smothering defensive work from Kate Burley and Sulu Fitzpatrick.

Once again, it was the Magic who kept their noses in front when leading 50-47 at the last turn.

... "That game was STOLEN! We demand a recount and the Refs need to go to Specsavers... We need to make the Magic GREAT again! Send us your money..."