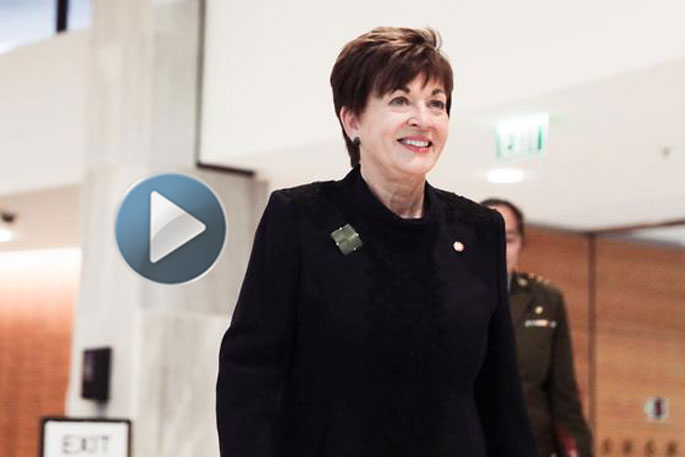 Prime Minister Jacinda Ardern is expected to make an announcement about the Governor-General in her post-cabinet briefing to media.

She is expected today to name who the new Governor-General will be after Dame Patsy Reddy's five-year term ends in September.

She succeeded former Chief of the Defence Force Sir Jerry Mateparae in 2016.

Dame Patsy is a lawyer who recently worked with Sir Michael Cullen on a review of New Zealand's intelligence and security agencies.

She told RNZ upon appointment she was "stunned" when contacted by Ardern to take up the role.

Prime Minister Jacinda Ardern has welcomed the appointment of Dame Cindy Kiro as the next Governor-General of New Zealand.

The appointment of Dame Cindy for a five-year term has been approved by the Queen and she will take up the role in October.

“I am delighted Dame Cindy has accepted the role. She has a highly distinguished and lengthy career in academic and leadership positions and has made significant contributions across a number of fields and organisations,” says Ardern.

“She is currently Chief Executive of the Royal Society - Te Apārangi, which advances research and scholarly activity in science, technology and the humanities and raises public understanding of those fields.

“Dame Cindy was previously the Children’s Commissioner, had leadership roles at several New Zealand universities, including Pro Vice-chancellor Māori at the University of Auckland, extensive health sector experience, and a number of roles in community and voluntary organisations.

“Over many decades, Dame Cindy has demonstrated her passion for the wellbeing of children and young people, as well as education and learning. I know she will bring that same commitment to all New Zealanders as Governor-General.

“We are privileged to have someone of Dame Cindy’s mana and standing for the role and I am very grateful that she agreed to become our next Governor-General.”

Ardern has thanks the current Governor-General, the Rt Hon Dame Patsy Reddy, and will host a State farewell for her in September.

“On behalf of New Zealand, I want to acknowledge Dame Patsy for her dedication and service as Governor-General over the past five years and to wish her and Sir David the very best for the future.”

latent racism from Andrew, "equality" and johnney ( who listens to far too much talkback radio b/s) Dame Cindy has the absolute right to be considered and appointed for this job. She has stated publicly how proud she is of both of her parents. She lives in NZ not England and has the inherent right to identify as Maori. The three above complainants ( and others) should examine their own prejudice before commenting on others.

Does she make the grade

This morning on the radio Christine Rankin made some very scathing comments about her abilities when she was children’s commissioner. How does the current ideologies about the colonial past fit with her being the Queen’s representative? Curious

Seems a nice woman and capable of fulfilling the position. She keeps saying how proud she is too be a maori. She is only half maori - with an English father. I wonder if she is also proud of her ’English’ heritage. Is she perhaps ashamed of her Father?. You are what and who you are - can’t choose sides!!

Race based politics again. It couldn’t have been any different under Jacinda. There’s clearly some deep rooted, misguided sense of guilt that sadly many middle class NZers feel has to be righted by discriminating against themselves. Roll on 2023 and the next elections.