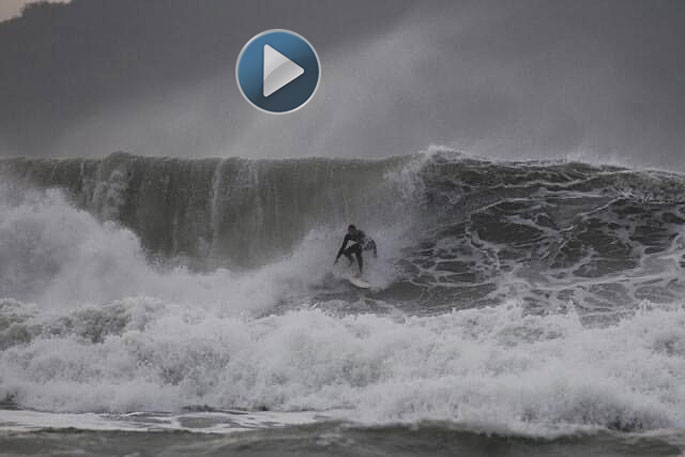 Whakatane photographer Wayne Feisst snapped this photo of local surfer Rusty at The Heads in Whakatane. Jane Kearns also caught some surfers on camera between Mauao and Matakana Island.

All walking track in and around Mount Maunganui are now open.

Access to Moturiki/Leisure Island was closed on Sunday due to heavy seas poising a danger to the public.

Mauao Base Track was also closed, as swells breached across the track.

Tauranga City Council confirms that all tracks are now open.

“Please be mindful that there is some damage to the tracks due to the storm,” says a council spokesperson.

“We'll have our people on site this afternoon to assess whether the base track will need to be closed for the next high tide.”

During Sunday’s sea swells, waves of up to 6.5m were recorded in Bowentown, while MetService recorded 8m swells in Pukehina.

A deep, slow-moving low northeast of New Zealand directs a strong, moist southeast flow across the North Island through to Tuesday, says the weather organisation.

"A strong wind warning remains in force for eastern Bay of Plenty and Gisborne north of Ruatoria, while Strong Wind Watches are in force for western parts of Taranaki, and the area near the ranges of eastern Bay Of Plenty, eastern Taupo, eastern Taihape and inland Hawkes Bay between Opotiki and the Napier-Taihape Road.

"Strong wind gusts could damage trees, powerlines and unsecured structures. Driving may be hazardous, especially for high-sided vehicles and motorcycles."

Area: The eastern Bay of Plenty east of Opotiki and Gisborne north of Ruatoria
Valid: 30 hours from 8pm Sunday to 2am Tuesday
Forecast: Severe gale southeasterlies in exposed places at times, with gusts reaching 120km/h, especially during Monday.