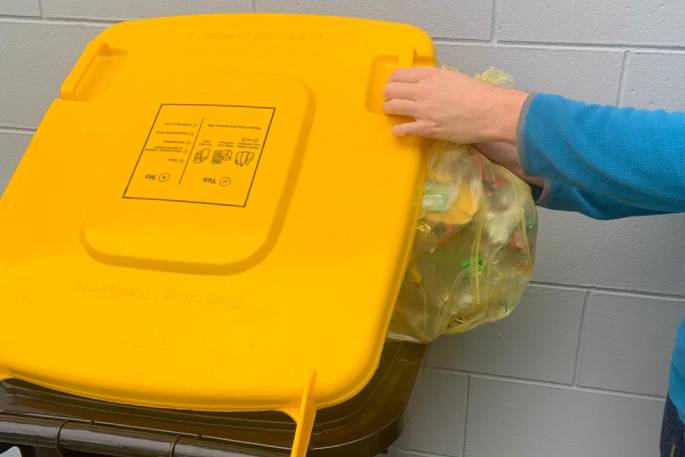 Residents in Tauranga and the Western Bay of Plenty could find their bins uncollected if recycling is not up to scratch. Photo. SunLive.

It means residents in Tauranga and the Western Bay of Plenty could face having their kerbside bins left uncollected if they repeatedly do not dispose of their trash efficiently.

EnviroWaste Services Limited, who have been contracted to undertake the new rates-funded kerbside collection services in the region, are currently advertising the newly created role for the Western Bay of Plenty area.

The job will involve random inspections of resident’s household bins to ensure efficient recycling and reduction of unnecessary landfill.

Explaining the role of the kerbside contamination officer, Tauranga City Council sustainability and waste manager Sam Fellows says the job will involve educating the community on how to recycle better.

“Recycling bins contaminated with unwashed or incorrect items are often sent to landfill, which costs more and is a waste of valuable resources,” Sam explains.

“As part of the new kerbside service, recycling bins will be checked randomly by the officer and households will be assigned a different coloured tag, depending on the quality of their recycling.”

Being labelled with a red tag could result in recycling not being collected until improvements are made.

Reasons for recycling being deemed inefficient vary from incorrect items to those that have not been cleaned prior to disposal.

Western Bay of Plenty District Council deputy CEO and group manager infrastructure services, Gary Allis confirms they have not yet finalised their own contamination plan with contractor EnviroWaste but that it would be “similar” to the one adopted by Tauranga City Council.

The cost of the new positions will be included under the annual targeted rates for both regions.

EnviroWaste states the new roles will help educate residents and improve any lack of understanding regarding what materials should go where.

“In some locations around New Zealand, there are reports of occasions where up to 40 per cent of recycling is contaminated as often well-intentioned people mix non-recyclables in their bins at home,” says a company spokesperson.

“The bin inspector has an important role to play in working closely with Council and helping to educate the public.

“Bin inspectors conduct random inspections of recycling bins for the purpose of advising residents how they’re going with recycling and to help them become a recycling champion if required.”

EnviroWaste suggests other similar programmes across New Zealand have been hugely successful, with some contamination reduction rates dropping from 40 per cent to four or six per cent due to regular bin inspections and education.

Safety is also a contributory factor behind the new roles, with EnviroWaste hoping to prevent sorting staff coming into contact with hazardous materials such as hypodermic needles, diapers, household chemicals and more.

A similar system is currently in place at Waipa District Council in Waikato after a trial period launched in August 2019.

Earlier this month, Waipa District Council recorded their “worst day” ever for contaminants finding 37 per cent of bins inspected were non-compliant and contained “blatant non-recyclable material”.

The system has led to 22 properties in the Waipa District Council area having their recycling collection services suspended due to repeat offending.

However, EnviroWaste is hopeful the new system in the Western Bay of Plenty district, where they will operate an inspection service, and Tauranga, will be of a major benefit.

“With a little bit of effort from everyone we can significantly reduce the waste in Tauranga and Western Bay of Plenty going to landfill, enhance the reuse of recyclable products and preserve our precious environment for future generations.”

Well Done! You summed it up very nicely. I’m just sorry you are right on the button...

I think it’s unfair that households of one or two pay the same as large families. A lot don ’t need all bins and would never put much into the general rubbish either but they in effect subsidize those who do. However it’s a done deal and no amount of complaining will change anything. Some adjustments after a year are possible but not very hopeful it will do much about inequity or cost

The fact that recycling would be policed was never a secret. So many at the recycling centres are already pollute the recycling, it was to be expected. Welcome to Tauranga, one of the worst cities in the country for rubbish, air and water pollution.

I’ll start farming maggots for them now then.

All this is going to do is encourage more fly tipping of rubbish & further cost to the tax payer to get it picked it up. People will end up going back to having weekly bonfires to burn off their rubbish rather than dealing with the hassle of the Bin Police. So lets get this right, TCC have sacked the current NZ contractor for a Chinese company rather than supporting local businesses , Made a final decision without consultation with their rate payers, Increased everyone’s rates to pay for something that we don’t want, Not provided a choice to opt in or opt out, And now policing what you can & can’t put in your rubbish. Sounds great, i can’t wait to see how this pans out.

So here we go, wasting our rates on rubbish inspection. Ripping off the rate payer at it’s best, we’ll done TCC. There will be more rubbish dumped on rural road sides and reserves, not to mention all of us only getting fortnightly collections for roughly what we pay for now getting weekly pick-up, and all the other kerosene collectors who will be out of a job, shame on you TCC RIP OFFS.

Summed it up in one line. Great comment. TCC have a lot of work to do to get back side with ratepayers and policing our rubbish isn’t going to score brownie points. Actually we could put it all into one bin and the rubbish police could sort it as they check it. Problem solved.

So don’t forget wash out all your bottles, jars and containers with YOUR water which is in short supply and TCC are putting up the water rates 30%. Just remind me what we are getting out of this apart from more work to get our rubbish out and increasing rates.

What a load of rubbish!

So, you’re charging me more for a bin that I didn’t want, to replace my existing bin I already had. Then you’ll pay someone to police the rubbish, invade my privacy and leave a tag to indicate if I’ve disposed of my trash adequately! TCC, you’ve got a nerve, why don’t you sort out your own rubbish, cos us rate payers have had it with your dumb ideas! I suppose when it all goes tits up, you can sell it for $1.

How to make friends and influence people

... have their recycling service suspended (which is probably what they wanted all along...) then it would seem that the answer is to repeat offend... Personally, I think we SHOULD recycle glass and plastic (and probably paper too if they still re-pulp waste paper and cardboard...) so I’ll try and comply. But washing it all first does seem a bit pointless. My dishwasher doesn’t require a pre-rinse so I can’t imagine that industrial machinery is going to. A furnace hot enough to melt glass should have no trouble with bits of strawberry jam, or Dolmio left on the jar. As long as we keep the lids out of it, that should be enough... slapping us with a sticker is childish and serves no useful purpose... (Mummy, I got a gold star today but the teacher took it off me because my knees were dirty...)

i can see lots of bins tipped out on the road. then the council will have to come and clean the mess up

......now that TCC have invented yet another problem to fix by way of compulsory kerbside collections, these unsuspecting individuals will shortly need (apart from stress leave) : a very, very good sense of humour (particularly if they are genuinely new to the city), probably protective clothing, probably body cameras and as time goes on probably protection...ALL paid for by the ratepayer and introduced by TCC needing to control....unbelievable....!

Why do I expect to be seeing rejected recycling material being flytipped along the side of the road? Our society is so hung up on what you CANNOT DO, without providing a meaningful solution to the problem.

What have this council descended too, policeing these bins is an insult to to the ratepayers of this city. We never asked for these bins despite your insistence that we did ,so to do this is a complete liberty.

So "The cost of the new positions will be included under the annual targeted rates". At what total cost?, including Council vehicles and safety gear, just how much has been budgeted for this new sevice ???? A simple question to answer TCC.

So as expected, we now get the rubbish police. Supposedly, their job is to "help us to recycle better". OK, so surely the public also needs our own rubbish police, to make sure that our City Council recycles better. Who is going to check on the fact that rubbish collection costs have already been projected to exceed estimates, and will continue to climb? Who is going to check that Council is doing a good job of collecting our rubbish? We, the citizens, also need our own rubbish police to check on our wasteful and inept council.

g Brother is amongst us! :(

So we are all expected to save the planet through efficient recycling, but they want us to use more water (which is in short supply) to wash the recyclable waste!!! Are the trucks which are collecting all this refuge electric or hybrid?

So much plastics are not recyclable. Our recycling is so rudimentary in what can be recycled. So much more could be if it is to be a serious attempt. There should also be drop off points for other items and more effort in reclaiming things look me electronics , batteries, etc