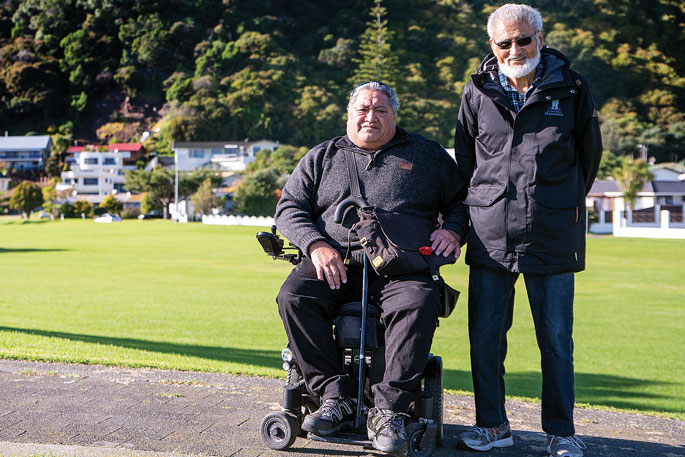 Fears for the health of their wives and future generations has led sawmill workers poisoned by toxic chemicals to restart their advocacy group, Sawmill Workers Against Poisons.

While providing for their families, the men were exposed to chemicals with dioxins that cause cancer, high blood pressure, depression, skin issues, mood swings and blood disorders.

The chemicals were brought back home to whanau on their clothing and on treated wood used to heat homes.

The men have fought for very limited ACC cover for themselves but there is still nothing on offer for their wives or children, who suffered birth defects because of their father’s exposure.

Following the death of SWAP stalwart Joe Harawira, the group became inactive, but former Whakatane Sawmill worker Kereama Akuhata says the time has come to reinvigorate the group to advocate for workers, their wives and children suffering the effects of the poisoning, but also for those living next to or on known dump sites of the chemicals.

“Just this morning, I had a phone call from a former sawmill worker who said ACC was refusing to pay for treatment of his skin cancer; he’s going to have to find the $9000 to pay for that himself,” says Mr Akuhata.

“In the last four months, we have had four men die and in the last year, seven. They have all died young of cancer, heart disease and diabetes and it’s all related to the chemicals.”

The average age of the deceased sawmill workers was 61.

In 2010, after pressure from SWAP, the Government admitted sawmill workers had been poisoned at work and it set up a special health service to meet their needs.

However, SWAP members say the service does not go far enough.

Only minor of symptoms are treated for free, such as skin rashes and excessive sweating. It includes only one free health check a year, and it does not include the whanau of poisoned men.

Research commissioned by SWAP showed that the children of poisoned workers will suffer birth defects and chronic health conditions for the next seven generations.

It is not just the people who have been poisoned, but the land too. There are 33 known sawmill chemical dumpsites in the Whakatane region.

The most poisonous in Whakatane, the Kopeopeo Canal, is being cleaned by bioremediation through action by SWAP and Greenpeace. However, other dump sites still exist and are not being cleaned.

Mr Akuhata says he fears for the health of people living near or on these sites, such as those next to the second-most poisonous site, Mataatua Reserve near Wairaka Marae.

There have been no studies on how those living by dump sites may be affected by the poisonous chemicals.

Former New Zealand Maori Council chair and SWAP member Maanu Paul says the Government encouraged sawmills to hire Maori men by advertising them as cheap labour and it was up to it to right the wrong.

Mr Paul says he would like to see the Government create a separate fund for sawmill workers to ensure free healthcare for them and their families.

“The Government is responsible for the redress.”

Mr Paul says he believes the Government is simply waiting for all the sawmill workers to die so the problem will go away, however, it has not considered the plight of the children.

He says the reinvigoration of SWAP will ensure the children of poisoned men are cared for.

“We will carry on for the children, they are innocent victims, collateral damage,” Mr Paul says.

“I cannot stress this enough, but the Government is responsible for the poor health of the next seven generations.”

Part of the reinvigoration is to plan for succession when the sawmill workers pass away.

Mr Paul says he hopes the Government will see the young ones coming to take the mantle and realise the problem is not going anywhere.

SWAP will be holding an AGM this Sunday, 10.30am at Wairaka Marae.

At the AGM members will be electing officers and seeking the mandate to go back to the Government to continue to seek redress.

so now we will have wards for chinese .indian, fijian and any other races in this country. each council will have at least 6 new wards now