Vessel sunk on its mooring at Pilot Bay 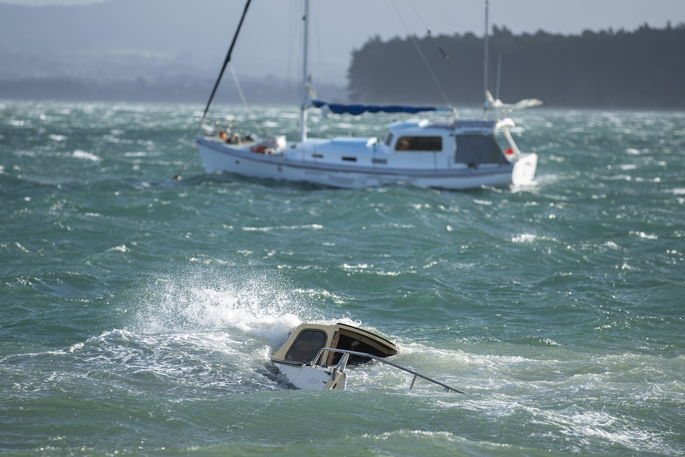 Only a fraction of the boat can be seen above water. Image: John Borren/SunLive.

UPDATE 3.30PM: Bay of Plenty Regional Council’s harbourmaster Jon Jon Peters has confirmed that a 7.9m boat has sunk on its mooring at Pilot Bay this afternoon.

Residents reported the vessel, possibly a yacht, sinking in rough waters earlier today and only the top part of the vessel is visible.

The vessel is about 20m offshore.

“A few pieces of debris have been collected from shoreline,” says Jon Jon.

“There’s no evidence of oil in water.”

The harbourmaster team are now investigating what caused the sinking and the owner was on their way to the scene.

However, due to the weather forecast, the boat is likely to remain sunken for the foreseeable future.

“Due to high winds there is no possibility of re-floating the boat over the next couple of days.”

EARLIER 2.48PM: A vessel is sinking at Pilot Bay this afternoon.

The vessel is about 20m offshore.

A spokesperson for Bay of Plenty Regional Council confirms that the harbourmaster has now arrived on the scene.

It appears that nobody was on board the vessel at the time of the sinking and the owners have been made aware.

“The water is quite choppy out there,” says a BOPRC spokesperson, who could not yet confirm if increment weather was the reason behind the incident.

“We are not sure yet what caused the vessel to sink.”

According to the MetService, strong westerly winds of about 52km/h are forecast for the region, with gusts of 74km/h s.

The MetService is forecasting strong westerly winds to ease this evening,

It is currently an outgoing tide, with low tide expected at about 5.42pm.