Imrie reigns again in the K1 500m at Lake Karapiro 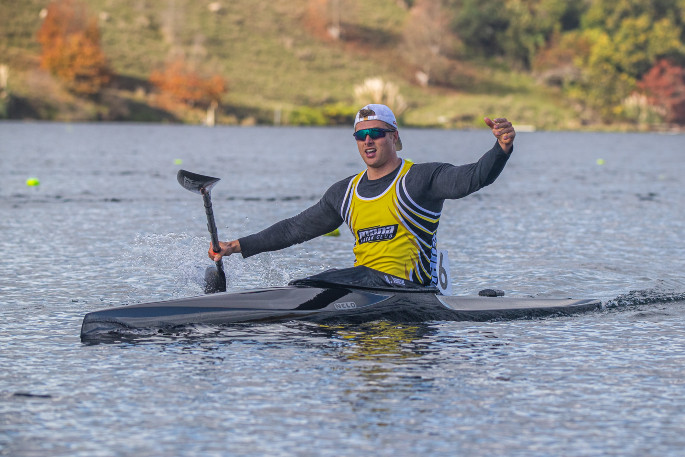 Kurtis Imrie after his win in the open men's K1 500m race at Lake Karapiro.

Olympic-bound Kurtis Imrie backed up his success on day one of the NCZT New Zealand Canoe Sprint Championships at Lake Karapiro to provide the highlight of day two courtesy of an emphatic victory in the open men’s K1 500m.

The Mana paddler, who yesterday claimed K2 1000m gold - alongside his fellow Tokyo Olympic representative Max Brown – and K1 1000m silver, revealed his class with a commanding win over his pet distance against a top-class field in a time of 1:46.25.

Imrie looked in imposing shape through the rounds, unleashing the fastest time of the nine qualifiers from the semi-finals to offer a strong hint he would be the man to beat in the final.

In a high-class A Final in which all nine men had genuine medal chances, Reiser along with Imrie established the early pace to quickly put their stamp on the final.

From the midway point, however, it was Imrie who gradually started to pull away and leading into the final 150m he further extended his advantage to claim a dominant win and regain the title he won in 2018 and 2019.

Competing in a tough crosswind, Reiser battled on to claim a richly deserved silver with Thompson finishing powerfully from the inside lane one to take an impressive bronze.

“I’m over the moon. The 500m is one of my favourite events and I’m excited my race went really well. We had challenging conditions out there, with a massive crosswind. I’m pretty stoked with that," says Imrie.

“I’ve learned over the years to ignore the weather. I grew up in Wellington, so I’ve trained in pretty average conditions before. I just go out there, put my best foot forward and today I was lucky enough to come away with the win.”

Imrie paddling alongside Taris Harker, Tim Waller and Jonty Laver for Karapiro had to settle for silver behind Arawa in a compelling final of the open men’s K4 500m.

The Arawa quartet of Jake Koekemoer, Ethan Moore, Hamish Legarth and Ben Duffy got out the stronger of and always held a slight advantage from the Karapiro foursome.

Leading into the final stages, the Christchurch-based team lengthened their advantage to win in a time of 1:29.42 – 0.58 clear of Karapiro.

With a group of the leading women’s paddlers competing at the Olympic K4 Trials in Auckland there were opportunities for the younger less experienced paddlers to step up and earn national honours and the crew of Matehaere and Clifton seized the opportunity to win in 2:03.71 – finishing 1.14 seconds clear of Sophie Brooke and Emma Kemp (Mana)

Bronze was awarded to Brooklyn Saunders and Alex Bermingham (Mana), who completed the distance in 2:07.63.

The gold medal pairing had carried a significant amount of crew boat work together last year and that experience paid dividends today.

“We paddled a lot together last year and we got in quite a good position before nationals in February until it was postponed (because of Covid restrictions). We’ve had a bit of time out of the boat together recently but it was good to get the win," says Clifton.

“It felt pretty good. It was a hard battle out there, but I’m glad we got it done. I’m happy with that," says Matehaere.

Fisher teamed up with Saunders, Kim Thompson and Bermingham to power to gold in 1:45.90 with the CRNZ quartet of Olivia Brett, Clifton, Matehaere and Tara Vaughan in silver (1:49.74). Bronze was secured by the Mana crew in 1:55.05.

Up to the minute draw and results can be found via the App -  Canoe NZ in the Play Store – which is free to download. Or check the Live Results Website liveresults.co.nz