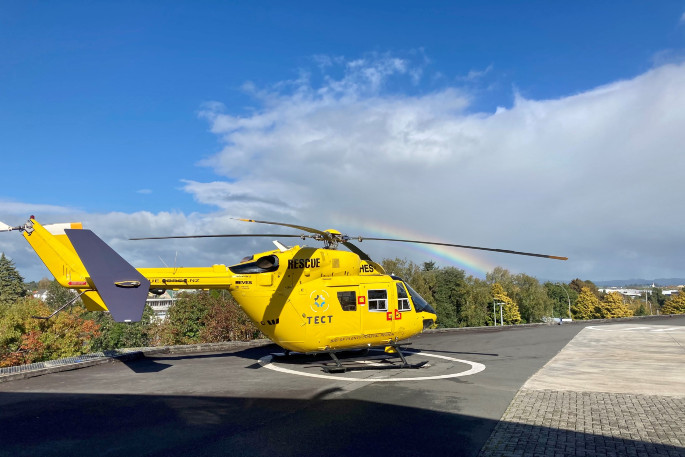 The TECT Rescue Helicopter has averaged more than one life-saving mission a day during April.

A total of 46 missions were completed during the month, including flights to an island, a gorge, and beachside towns from Athenree to Te Kaha.

Locations in demand this month were Matakana Island with two flights out to the island, Waihi –three, Opotiki – four, and one flight to Te Kaha.

“Of these 46 missions, four motor vehicle accidents, two rural, 14 inter-hospital transfers, 11 medical and nine rescues were completed by the onboard crew over the month,” says a TECT Rescue Helicopter spokesperson.

On Friday, April 2, the TECT Rescue Helicopter was called to Athenree Gorge, following a motor vehicle accident which left a 46-year-old father and his seven-year-old son injured.

“Both patients required urgent transportation and were flown to Tauranga Hospital for further treatment.”

The onboard crew flew to Opotiki multiple times during April.

On Thursday April 15, the TECT Rescue Helicopter transported an eight-year-old boy with serious injuries from Opotiki to Tauranga Hospital after he was hit by a ute. He was accompanied on the flight by his mother.

The helicopter and crew visited Opotiki again on April 21 for a patient suffering serious injuries and flew them to Waikato Hospital.

On April 24, they returned to Opotiki for a male patient in his sixties who required urgent medical care. The patient was treated by the onboard crew before being flown to Tauranga Hospital.

“These missions were time-critical, made possible thanks to generous donations from the public.”

"We rely heavily on the generosity of sponsors and the community to help fund the shortfall that allows us to be rescue ready 24/7, 365 days of the year. This crucial financial support ensures our rescue helicopter can continue to bring life-saving equipment, rescue personnel, and intensive care paramedics directly to the patient.

"Without your support, your rescue helicopter would not be able to remain operational on a 24/7, 365 day a year basis. This could mean a serious delay in people being rescued or transported to hospital for urgent treatment."

To all the helicopter staff. You do an incredible job and we appreciate you . . . Although one pilot seems bit of a cowboy . . .