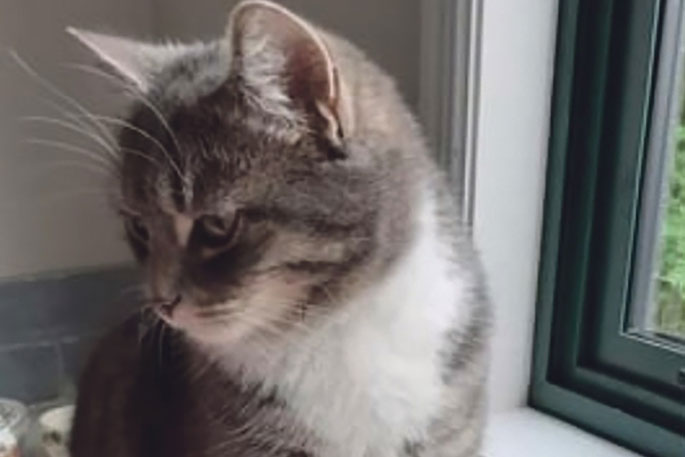 Lilly, the much-loved cat that stowed away on a removal truck from Tauranga. Photo supplied.

When a removal truck pulled up in her street in Tauranga, Marilyn Greenfield knew she was losing a neighbour, but never dreamed her beloved moggie would be lost, too.

On that wet day in mid-April, Lilly, a three-year-old cat Marilyn had kept by her side since it was a kitten, jumped out of the rain and into the truck headed for Otaki.

“The truck was pulled up right outside my front door,” Marilyn says from her Tauranga home.

“It was a very wet day and although very timid, she obviously decided to jump on board – a stowaway from Tauranga to Otaki.”

It was only when the removers arrived in Kirk Street, Otaki, that they realised they had a surprise passenger.

Frightened by her ordeal and unfamiliar surroundings, Lilly ran for it.

Meantime, Marilyn had been hunting for Lilly when she got a call from the now-moved neighbours who had recognised the cat as it scampered into the wilderness.

Marilyn tried desperately to get to Otaki, but no one was able to help by driving her down.

She posted on a Kapiti lost animals Facebook page with photos of her “lost precious puss”:

“Please have you seen this wee girl? She probably won’t come when you call so if you see her, do get in touch.

“I would really love to take her home with me. She has been out in your area far too long now, will be very scared and frightened. Sadly she hopped into a truck bound for Kirk Street from Tauranga.

“She is very timid with the majority of her three years having lived in a rural setting. If you have seen her or think that you have, please contact me [phone number].”

The frantic and at times tearful hunt was initially from her home in Tauranga, wondering where poor Lilly might be, and then for three days in early May from the Littel Otaki motel in Dunstan Street.

“Each day I walked and walked in the mornings, calling her name, then again in the afternoon till I could go no further,” she told Otaki Today.

“I had a feeling on the second day that I would never find her, call it what you will.

“But I had to do something. I was all alone in a place I had never visited before.”

“I took a closer look and saw that it was a dead cat,” Phil says.

“My first inclination was to bury it, but I thought someone would be missing it, and it could be a child’s pet.”

He left it where it was in case someone was searching in the area, but began his own online search in his lunch break for missing cats.

One social media post caught his eye – the one by Marilyn – especially as the cat looked like the one he had found.

Phil left a message on the post and didn’t have to wait long before he got a reply.

“Marilyn got in touch and I texted her a photo. She said she thought it was her Lilly. I asked if she wanted me to bury Lilly or bring her to her, because she didn’t have any transport.”

Marilyn wanted to see Lilly, so Phil gently placed the cat on some kawakawa leaves in a box and took her to the motel.

“It was her alright. Marilyn was really upset. It wasn’t the outcome she obviously wanted, but at least we’d found her cat and she got some kind of closure.”

Marilyn says a local woman came with a towel and stayed with her until another came with a plastic box and masking tape, so she could return to Tauranga with Lilly.

“Both of them gave me the comfort I so badly needed in my time of grief.”

While she was distraught at losing her friend and companion, she was full of praise for the people of Otaki who had helped her.

“I have been blown away by the way people in Otaki rallied around giving support, helping search and now Lilly has passed, their kind words have been amazing.

“Otaki has some wonderful and kind people.”

Lilly is now buried in Marilyn’s back yard next to a new rose bought by Marilyn’s daughter-in-law.

The name of the rose? Loving Memory.

Oh I didn’t realise this article would have a sad ending. It brought me to tears as I have a cat who is very similar in nature to Lilly. I am deeply sorry for your loss Marilyn.