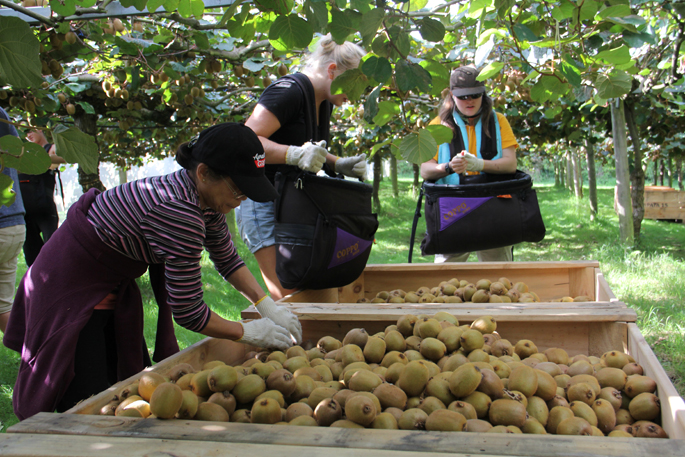 About 2400 more migrant workers will be allowed into New Zealand for seasonal horticultural work, Prime Minister Jacinda Ardern has announced.

Thousands of spaces in managed isolation and quarantine facilities will be freed up over the next 10 months, many of which will be made available for skilled and critical workers.

Ardern announced 500 rooms in managed isolation and quarantine (MIQ) would be set aside every fortnight for certain groups.

There will also be rooms for 100 refugees every six weeks from July.

"The last 13 months have been tough for many but have been particularly challenging for our agriculture, horticulture and viticulture sectors," Ardern says.

Some 20,000 rooms would also be made available for people wanting to come home to New Zealand via the MIQ vouchers system.

She says the opening of the trans-Tasman quarantine-free bubble had given some flexibility in freeing up spaces, and there was an excess of availability in MIQ.

Covid-19 Response Minister Chris Hipkins says that, concerned about the risk of having more people arrive at MIQ from high-risk countries, the government was still managing how the extra places are used and will decommission some facilities.

With fewer New Zealanders returning, Hipkins says it presents the opportunity "to focus MIQ more on bringing in skills to support our economic recovery".

"We have carefully balanced the need for New Zealanders to return home. We are, at the moment, seeing lower demand for managed isolation facilities," he says.

"Now is a good time to return home."

"We're consistently averaging more than 10 percent of MIQ spaces set aside for economic purposes per month, which Labour promised at the election."

Hipkins says that employers would still need to bear the costs of horticulture workers going through managed isolation.

This will also help deliver the "pipeline of critical infrastructure work that will accelerate our recovery", Hipkins says, and "gives certainty for planning projects with specialist workers from overseas, maintains construction jobs for Kiwis and will bring new knowledge to New Zealand for employers and employees".

"The Construction Sector Accord has consulted widely and it will continue to work with industry to prioritise the specific types of skills it needs - they include civil and structural engineers, project managers and a range of specialist technical workers such as hydraulic modellers and mass transit specialists.

"We've also renewed border exceptions for shearers, rural mobile plant machinery operators and essential travellers to and from the Pacific. They will need to book spaces through the online Managed Isolation Allocation System," he says.

"This decision should see around 2400 more RSE workers entering New Zealand in time for next summer's harvest season and pruning this winter.

"This is in addition to the 7300 RSE workers currently in the country, including the 2000 the government approved to support the horticulture and viticulture industries during the recent summer harvest season," O'Connor says.

"Border class exceptions have also been agreed for 40 more shearers and 125 rural mobile plant machinery operators for the 2021/2022 season - subject to completion of sector workforce plans, a model to upskill New Zealanders and agreed wage rates."

We’re in a housing crisis where we can’t put a roof over the heads of people who have been here for generations and we’re still admitting refugees AND migrants. What sort of management do you call that...? The RSE policy is too little and too late. This government has been lobbied about the crisis our produce sector for months.... This is just not acceptable.