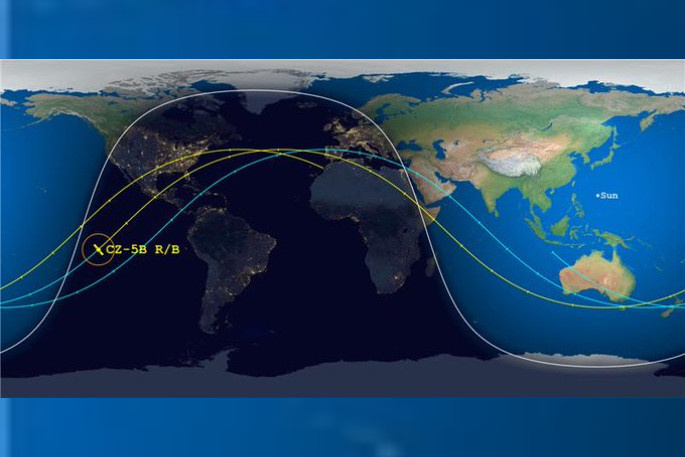 Debris from the Chinese Long March CZ-5B is expected between 1am and 5pm NZ Time: The Aerospace Corporation.

Update 1pm: The Aerospace Corporation is predicting that the out of control CZ-5B rocket body is on track for reentry over the Pacific Ocean west of South America.

Spain, Israel, Saudi Arabia, Australia and New Zealand are all in the risk zone for space debris with the highest probability for ocean impact.

China's foreign ministry said most of the rocket debris was expected to burn up on re-entry, and it was highly unlikely to cause any harm.

By late Sunday morning the latest prediction for when re-entry would happen was two hours either side of 3.02pm New Zealand time, the EU Space Surveillance and Tracking (EUSST) says.

The probability of a ground impact in a populated area was "low", the EUSST said on its website, but it noted the uncontrolled nature of the object made predictions uncertain.

Another organisation tracking the rocket pieces said it could touch down in the Tasman Sea, between New Zeland and Australia; Re-entry and debris experts at Aerospace Corporation, a US government funded research and development centre predicted the re-entry for 3.26pm NZ time Sunday.

However, even a tiny variation in the entry time could mean the rocket actually enters over South America or Africa.

Earlier, 11am: An out-of-control Chinese space rocket is expected to come crashing back to Earth within the next five hours.

Space Track has projected the re-entry of the CZ-5B rocket body to be between about 1pm and 3pm NZ time over the North Altantic.

The Center for Orbital and Reentry Debris Studies – CORDS – at the Aerospace Corporation has been tracking the Long March 5B re-entry with the decreasing uncertainty window originally extending from as far north as Chicago, New York, Rome and Beijing and as south as New Zealand and Chile.

The 21-tonne Long March – Chang Zheng – CZ-5B rocket was launched a week ago to deliver the core module of Tianhe, the new Chinese space station into a circular orbit ranging between 340km and 450km above Earth. It has been circling the Earth at just under 300km and is expected to come down in a fireball.

With a take-off weight of 22.5 tonnes it is the largest and heaviest spacecraft ever built in China.

The core rocket stage is estimated to be cylindrical with dimensions of 5 x 33.2m and a dry mass of about 18 metric tons.

The core booster used to lift Tianhe did not make the deorbit burn that would have allowed for a more controlled and predictable re-entry and on the May 4 the 5B booster began an uncontrolled re-entry.

Before the rise of the Space Age in 1957, the only things we had to worry about falling from space were meteors, asteroids and the occasional comet. But today, satellites and spacecraft regularly launch into orbit and beyond, and sometimes they fall back to Earth.

Tracking site orbit.ing-now.com says the rocket has come down about 30km in the last 24 hours.

Space Track has updated their tracking of the rocket this morning, posting:

Aerospace says the centre of the current prediction window places the CZ-5B rocket body reentering over the North Atlantic.

On Saturday Aerospace predicted that the CZ-5B rocket was possibly coming down near the North Island of NZ.  Predictions for time and location become more specific as re-entry time draws closer.

Our latest prediction for #LongMarch5B CZ-5B rocket body reentry is 09 May 2021 04:19 UTC ± 8 hours along the ground track shown here. Follow this page for updates: https://t.co/p2AU9zVEpA pic.twitter.com/rsE6yzcnHb

Never mind, we’ll just have to wait 2 years before evicting them...

and picked up that lot in there and re-entered space for ever.

what a blow. i thought it might have come down on that round building in wellington