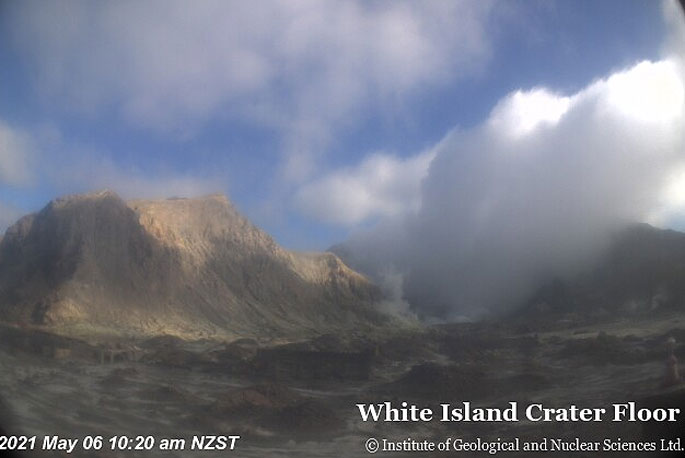 The activity was observed on April 29. Image: GeoNet.

Volcanologist are reminding people that Whakaari/White Island’s alert level remains at one, despite a short-lived burst of activity on April 29.

The brief period of low-energy tremor and acoustic signals was recorded on April 29 at around 2230 NZST as a sequence of small volcanic earthquakes, leading to volcanic tremor, says GeoNet duty volcanologist Brad Scott.

“During the period of volcanic tremor, impulsive acoustic signals were recorded and this lasted for several hours.”

An observation flight on April 30 confirmed there was no ejected material from this seismic activity – unlike in previous episodes when ejected material was seen within metres from the active vent.

“No observations of changes were seen on the island’s webcams,” says Brad.

“This episode is likely caused by a series of low-energy subterranean explosions.

Gas and observation flights have confirmed the amount of gas been released from the volcano is unchanged since March.

The volcano continues to produce a moderate gas and steam plume, and this will cause weak acid rain downwind.

Brad says the thermal infrared measurements also confirm the temperatures of the active vents are not changing significantly.

“The level of seismic tremor remains at background levels.

“These observations and the observed minor activity are consistent with the ongoing activity.”

The Volcanic Alert Level remains at 1 and the Aviation Colour Code remains at Green.

The Volcanic Alert Level reflects the current level of volcanic unrest or activity and is not a forecast of future activity.

While Volcanic Alert Level 1 is mostly associated with environmental hazards (including discharge of steam and hot volcanic gases, earthquakes, landslides and hydrothermal activity) eruptions can still occur with little or no warning.

Brad says the main plausible triggers for a sudden eruption are the collapse of unstable material in an active vent and the possible ingress of water underground onto the shallow magma body.