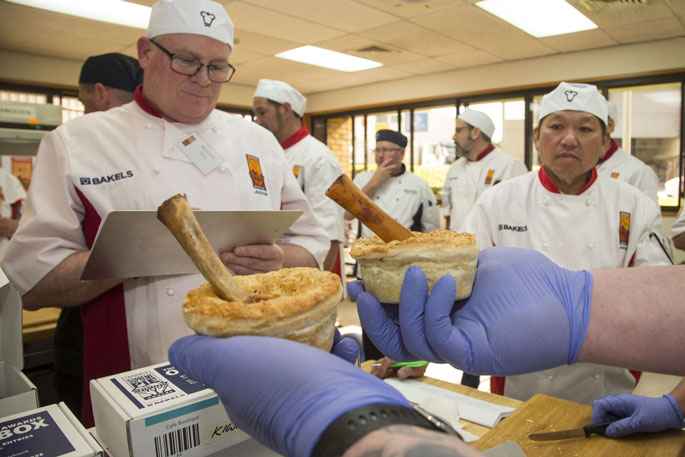 Judging the 2019 awards -The ‘Flintstone’ pie contained beef brisket with the bone protruding through the pastry. Supplied photos.

The search is now on the for the 24th Bakels New Zealand Supreme Pie Awards.

Any commercial or retail baker can enter at www.nzbakels.co.nz including café and catering bakers.

To be named the Supreme winner will mean a massive boost to their business with extensive media coverage.

Pie lovers across New Zealand will be racing to their bakery to try the champion pie and the bakery’s name will go down in history in a blaze of glorious pie-making.

This year our most recognised celebrity chef, Peter Gordon, will help decide the winning pie, having returned to New Zealand to establish his Homeland restaurant and cooking school.

While fine food and fusion cuisine might be his forte, Peter says he loves a good Kiwi pie and he’s excited about finding one among the thousands of entries.

NZ Bakels managing director Brent Kersel says there is a real sense of excitement about the launch of the 24th Bakels NZ Supreme Pie Awards.

"Many bakeries were badly affected by the Covid lockdowns and although they have been able to regain much of that lost business, the Pie Awards were something they really missed as an opportunity to test their skills against other bakers," says Brent.

"The Pie Awards have become the ‘Oscars’ of New Zealand’s baking industry and it’s fantastic to be able to celebrate the best in the business. 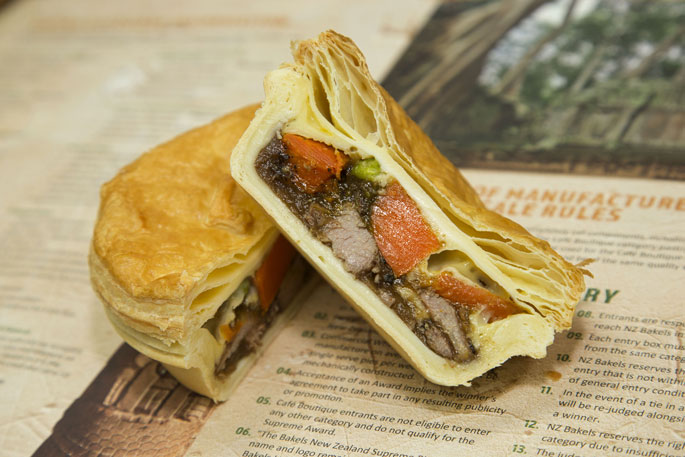 "We created the Pie Awards in 1996 with the intention of improving the overall quality of pies in New Zealand but the competition has gone way beyond that."

From basic beginnings to 12 judging categories; in excess of 5000 pies entered and multiple Supreme winners, not to mention our current reigning champion, Patrick Lam of Patrick’s Pies Goldstar Bakery in Tauranga, who holds the record for seven Supreme Award wins.

Brent says it is an absolute honour to have Peter Gordon joining the judging team this year.

"Peter is recognised the world over for what he has achieved as a chef. Without his talent we may not have had fusion food. Imagine that! And we’re very privileged to have him judging our pies. I think the Gourmet Meat and the Café Boutique categories will be of particular interest to Peter.

"They are categories where our bakers really become inventive, often with spectacular results, like Clareville Bakery, which won Supreme in 2014 with a lamb cutlet protruding the top pastry and nestled in a creamy kumara mash.

"In our 2019 competition we renamed the Steak and Gravy category to the Truckie & Tradie category and one lucky truck driver won a chance to attend the Pie Awards.

"This year we’re doing that again. The Gourmet Meat category has been selected to be the Truckie & Tradie category after loads of truckies and tradies recommended their favourite pie was actually a little bit more gourmet.

"Is there a spectacularly delicious pie out there in a pie warmer waiting for its moment in the spotlight? We sure hope so! Let’s start searching for that pie."

A pie with a huge bone in it?! They’ll be putting cheese in next.